This was the day we have been waiting for, you better Belize it! Belize has been on our radar for several years. In fact, the original plan was to get a residual or online income of $2,000 USD and move there permanently. Belize is very aggressive about attracting expats to their country. If you are a citizen of the USA, UK, Canada or Belize, over 45 years old and have a verifiable income of $2,000 per month you may apply for Qualified Retired Person’s status. This status exempts you from all taxes on incomes and receipts. Gives you a one-time exemption of import duties allowing you to import all of your personal belongings into the country.  In doing some research $2,000 per month in Belize will go pretty far. We found that most expats retire to the Cayes (pronounced keys) Ambergris is the largest and most popular, but there are many others that are smaller such as Caye Caulker. These small islands are literally the Caribbean paradise most imagine.

When we first booked this trip, Amy decided that she wanted to see the famous Blue Hole. She booked us a chartered flight with a local airline and it was going to be the crowning jewel of the trip. We were so excited and it showed whenever we spoke to others of Belize.

The harbor in Belize city is very shallow so this was a tender trip to shore. Nothing like 300 tourists sitting shoulder to shoulder in 95° heat for a 15-minute boat ride! 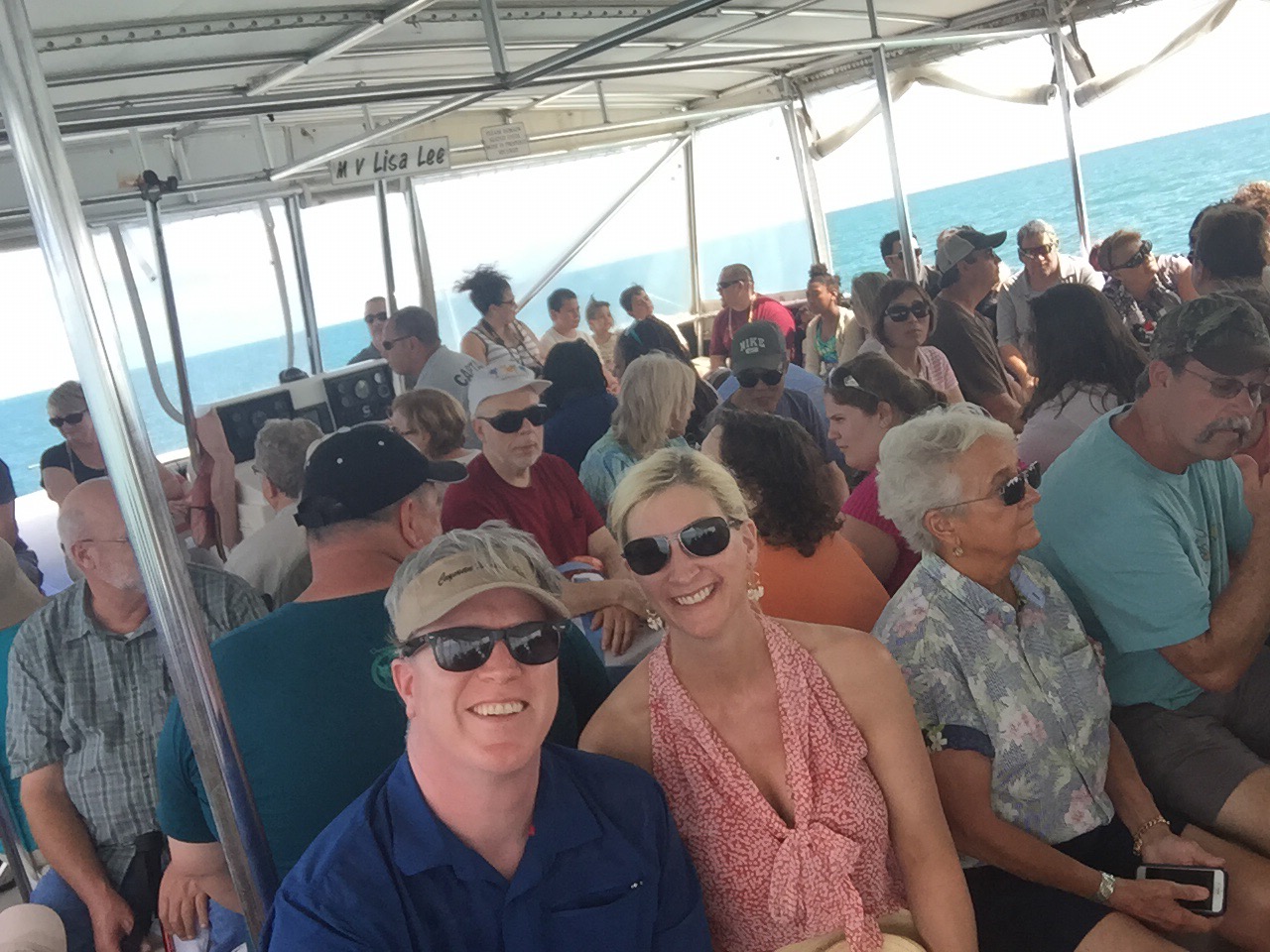 We arrived on shore about 9am and had 2 hours to kill before our chartered flight at 11:00. We made our way through the carnival at the shore and walked through the gates into Belize City. We quickly met a gentleman offering us a tour of the city. He was carrying a laminated poster board that had pictures of sites that looked like they were cut from a travel brochure and glued on. There was also a picture of his 1996 Lincoln Continental with tinted windows and air conditioning, which we would be chauffeured around in. He agreed to take us to the airport after our tour of the city so we hopped in his car and headed off. It became evident pretty quickly that this guy may have known how to help tourists get rid of some cash that may be weighing them down. LOL. He was a real estate guy and business consultant that helped an American in New York secure a several million dollar a year government contract. He also had a friend that wanted to show us a very rare pearl that he had for sale. Someone had already offered $5,000 but if we wanted to see it, he could make that happen and maybe help broker a better price. It made for a fun ride. We learned about the history of Belize, went to a very old catholic church and we even got a few bottles of the local beer. We had beer and he got water in a bag. No joke! Look at the picture!

We got to the airport and got checked in for our flight. We waited in an air conditioned room with a few others that were waiting for flights to take them to other destinations. The planes were small, like 10 passenger planes and one of the seats was actually up next to the pilot! A couple from our cruise was there waiting to be taken somewhere for a SCUBA excursion and we shared our awesome Guatemala experience with them.  After a little while, the girl from the counter came in with some bad news. The plane we had chartered was having mechanical difficulties and would not be ready until 3pm. We had to be back for the last tender back to the ship by 4:00 so it would seem our plans of seeing the Blue hole were shot. We were severely bummed and now half of our time was gone and we were at an airport away from all of the water taxi’s that could take us to any of the places we had only read about.

After about 30 seconds of whining and self-loathing we asked if we could change our tickets for a trip anywhere else? The answer was Caye Caulker. A plane was leaving in 20 minutes and we could actually have a little over 2 hours on the island and make a flight back in time to get back to the ship! This is where being flexible and creative comes in handy. We did not look at the situation as something that happened to us, we looked at it as something that happened for us. 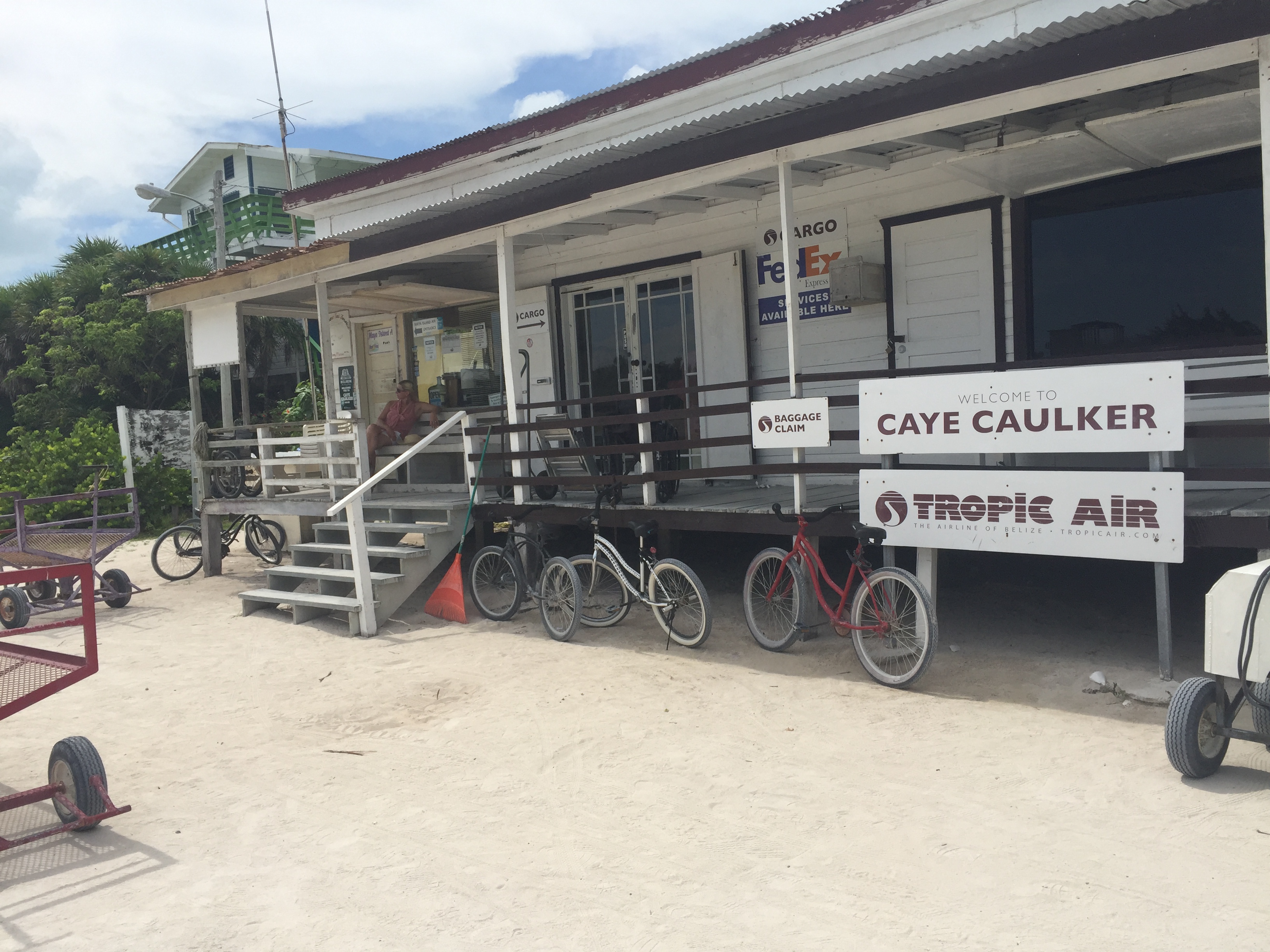 Caye Caulker is a very small island. About a Quarter of a mile wide and a few miles long. In 1961 hurricane Hattie washed out about a 40-foot section of the island. “The Split” as it is called, divides the Caye. The Southern end is the one we were headed to as it is where the airstrip is. Approaching was beautiful. The Caribbean below us was dotted with what seemed to be hundreds of small islands, most of them uninhabited. The airstrip ahead of us was just that. A tiny runway that looks as it was left from some Drug lord in the 80’s. The “terminal was about an 800 square foot building with a covered front porch spanning the front. The rickety stairs up and white washed rails were charming and very informal.

We were greeted by a boy in shorts and an LA Lakers tank top on a golf cart asking if we were the ones looking to rent a golf cart and if we had any luggage.

The southern section of the island we were on had 3 main streets; Front Street, Middle Street and you guessed it, Back Street. They ran parallel, North and South from the Airstrip north about a mile to the Split. There are no cars either. Golf carts, Bicycles or the heel-toe express is all you need to get around this beautiful place.  We rented our golf   cart for $20 USD and took off to explore!

We made our way out to Front Street as it is the side of the island that faces west towards the coral reef. Belize’s coral reef is actually the largest living reef in the world and home of some amazing diving and snorkeling. The first thing that we noticed is the speed at which everyone operates down there. The only people in any kind of hurry were the few tourists we saw and it just looked like they had not been there quite long enough to acclimate to “Belize time”. There are a few very small hotels and some AirBnB rooms here. Locals far outweighed the tourists we saw but, it was in May and the tourist season was winding down. We parked our golf cart and walked out onto a dock to take in the postcard setting of the view. 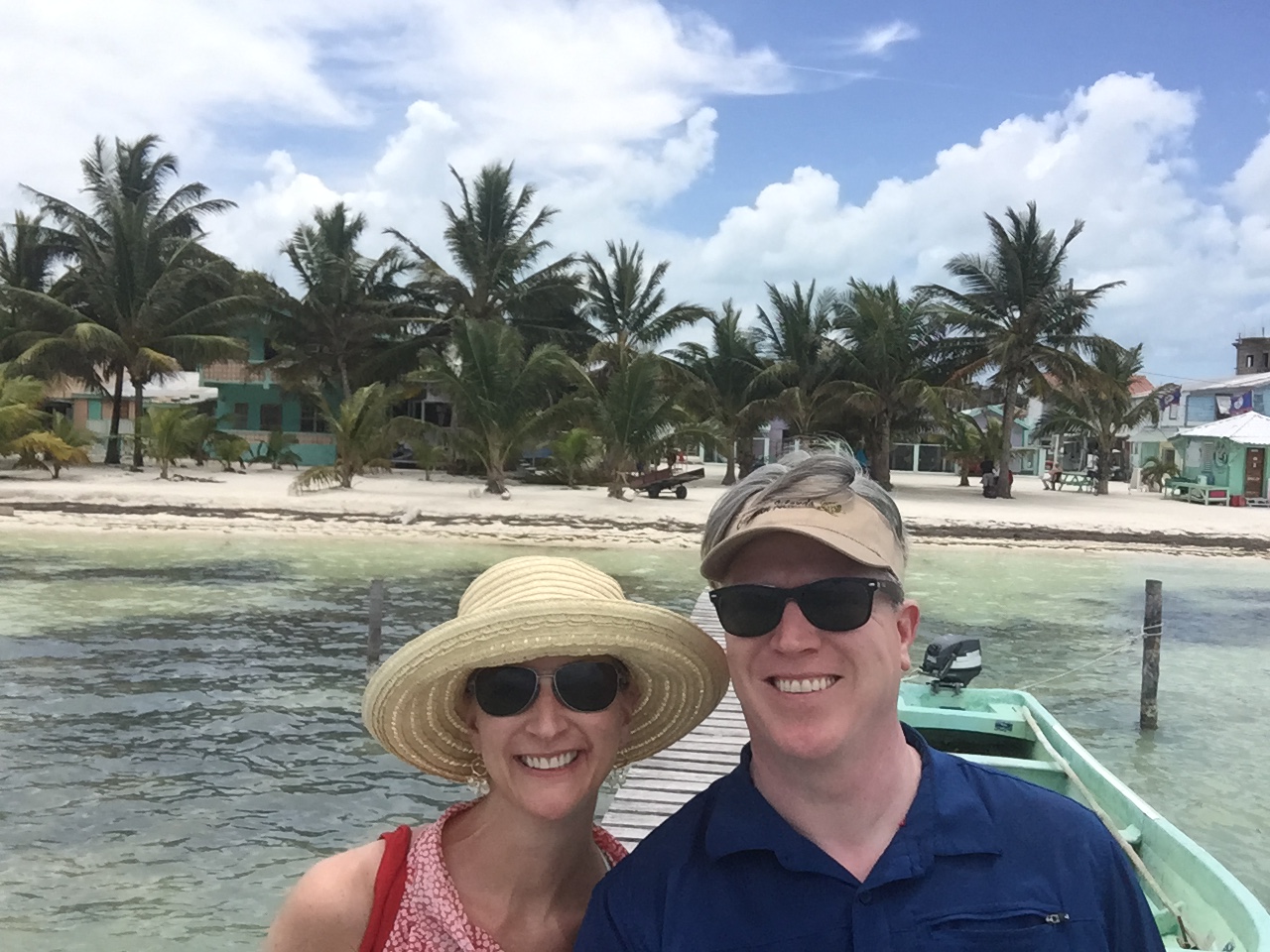 We had talked about this moment so much and we were finally here, Caye Caulker! It is amazing when you get to a place and it looks just like it had been portrayed. Unlike the disappointment of a fast food menu picture differing from the sandwich in your hand but, a fantastic true depiction. We were so happy at that moment and considered never going back to the ship.

We walked down a path and found our way into an open air restaurant. There were no walls just a sitting area, a bar, and a 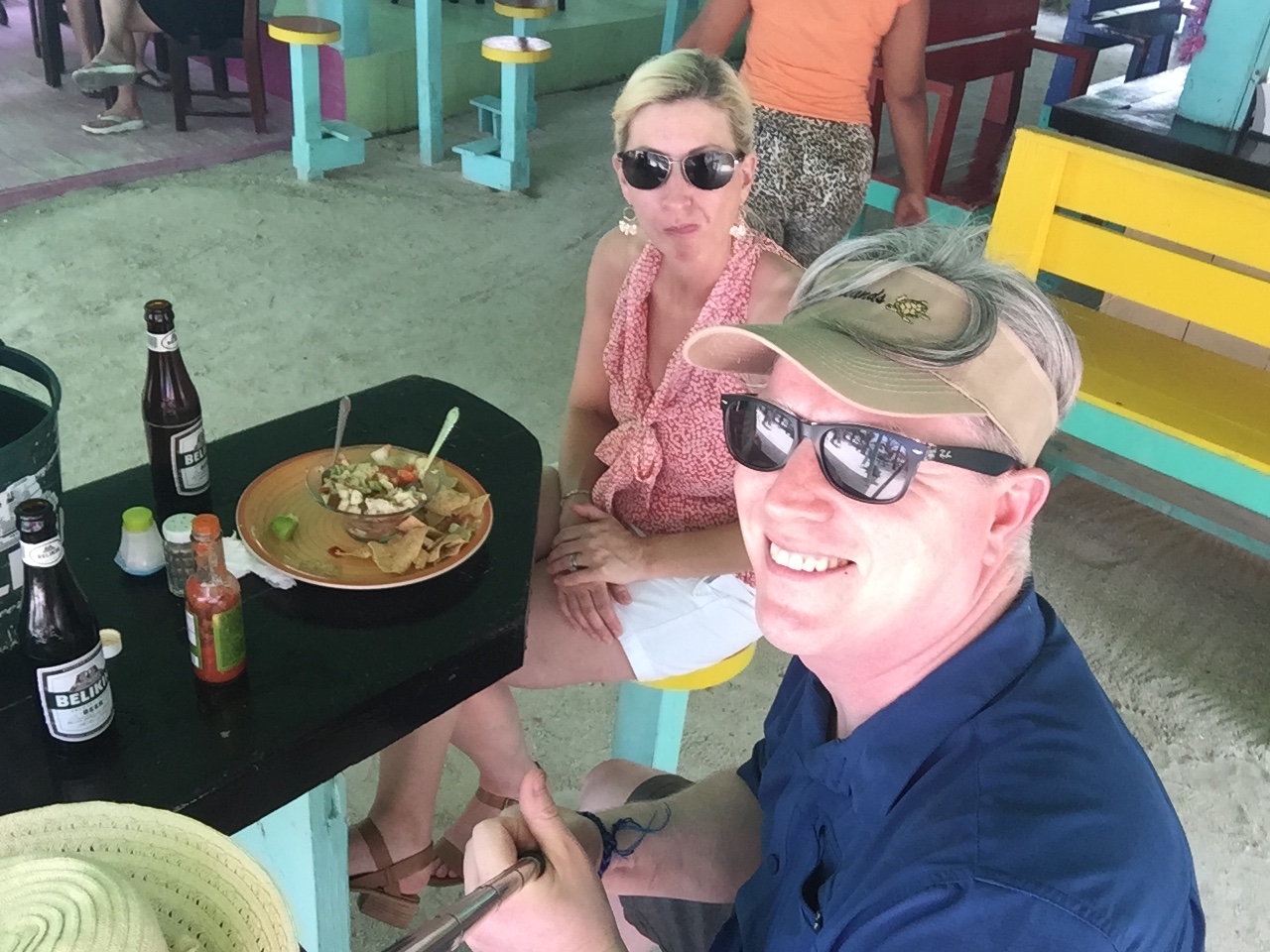 kitchen area tucked under a residence above. Most houses are built off of the ground a story because of flooding and hurricanes. The bottom story is usually a garage or storage but here it was a restaurant! We sat down and ordered a couple beers and an order of fresh seafood ceviche. You can bet it was as good as it sounds. Fresh calamari, conch, and shrimp ceviche in Belize is pretty awesome. The owners of this place had moved here from Cuba four years earlier. They run the bar and restaurant and live in the house upstairs with their pre-teen son. They have two rooms that share a bathroom that they also rent out to travelers.

With snacks in our tummies we set out to discover the island. We went into the local general store to get a feel for prices and surprisingly, it was very reasonable. The currency rate is $1 USD to $2 Belizean. Milk, eggs, bread and even Red Bull were about the same price as we pay here at home in Washington State. The store carried most everything you could think of from food and beverages to t-shirts and Knick knacks. We traveled North to the split and systematically investigated the entire Island. Homes we saw ranged from shanty type dwellings to large 3-story homes flying American flags. We witness construction teams digging a foundation in bare feet and families cooking on grills on the side of the road. Everybody smiles and waves and there was a huge sense of community.

We discovered that Back Street, in the center if the island is where the utilities of the island are. We heard the loud roar of machinery and went to find 6 boxcar sized diesel generators that power the entire island. Next to that was the communications center for the island and in the very back of the island is the dirty secret of burning the garbage. We could not tell if they actually burn all of their garbage but there were several piles and evidence that a lot of it gets burned on Back Street.

We spent more time just driving and exploring. We took note of homes and land for sale and soon it was time for us to start heading back to turn in the golf cart and catch our plane back to Belize City and the ship. Remember there are only 3 streets here on this island but, we did not really pay enough attention to where exactly we got the golf cart from. The shop was actually off the street behind a house and we started to get nervous we would miss the plane back if we could not find the place soon. Luckily we did find it and got a quick shuttle back to the airstrip.

While waiting for the plane, we explored an abandoned resort right next to the airstrip and found the island 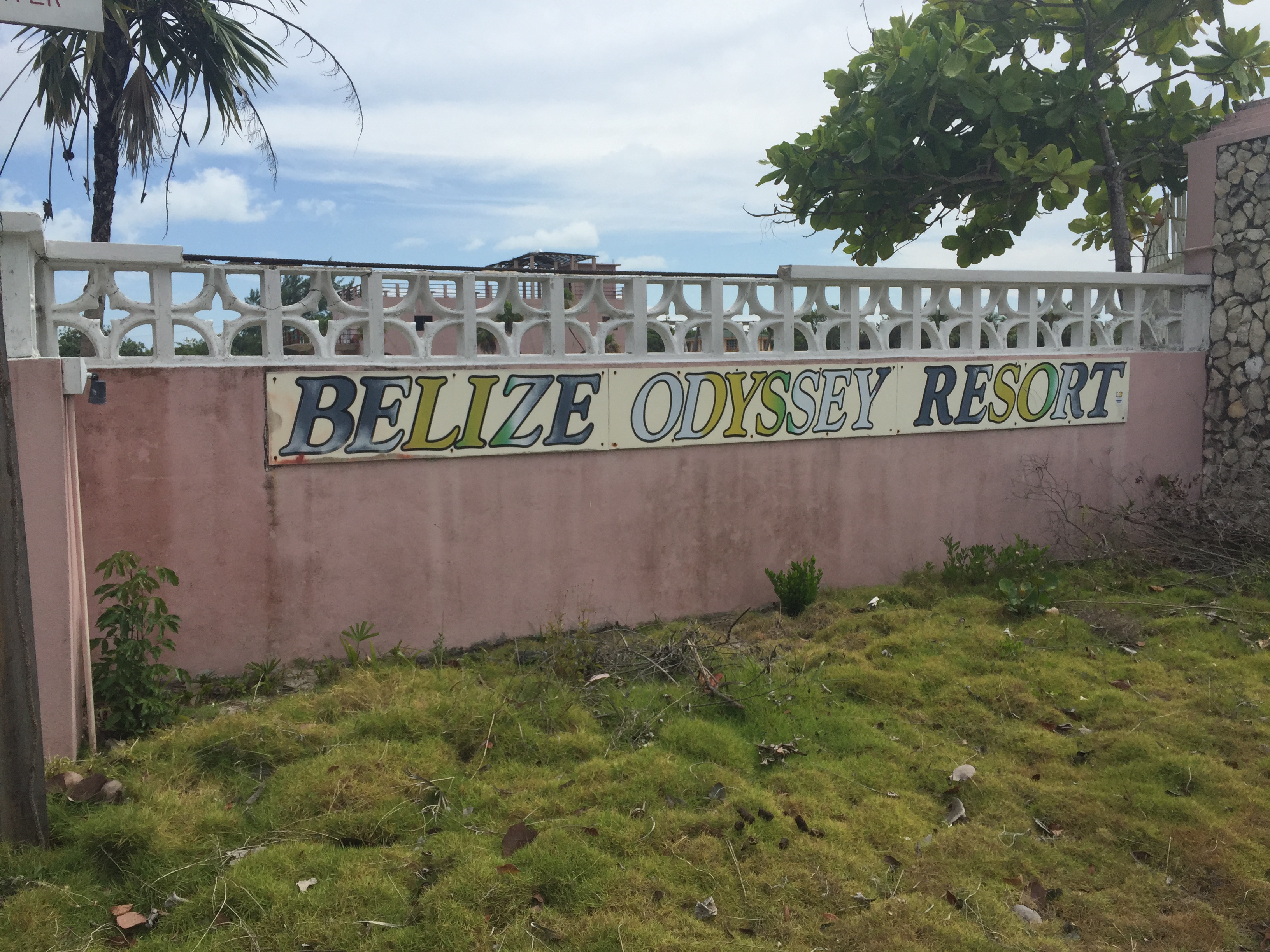 Abandoned Resort by the airport 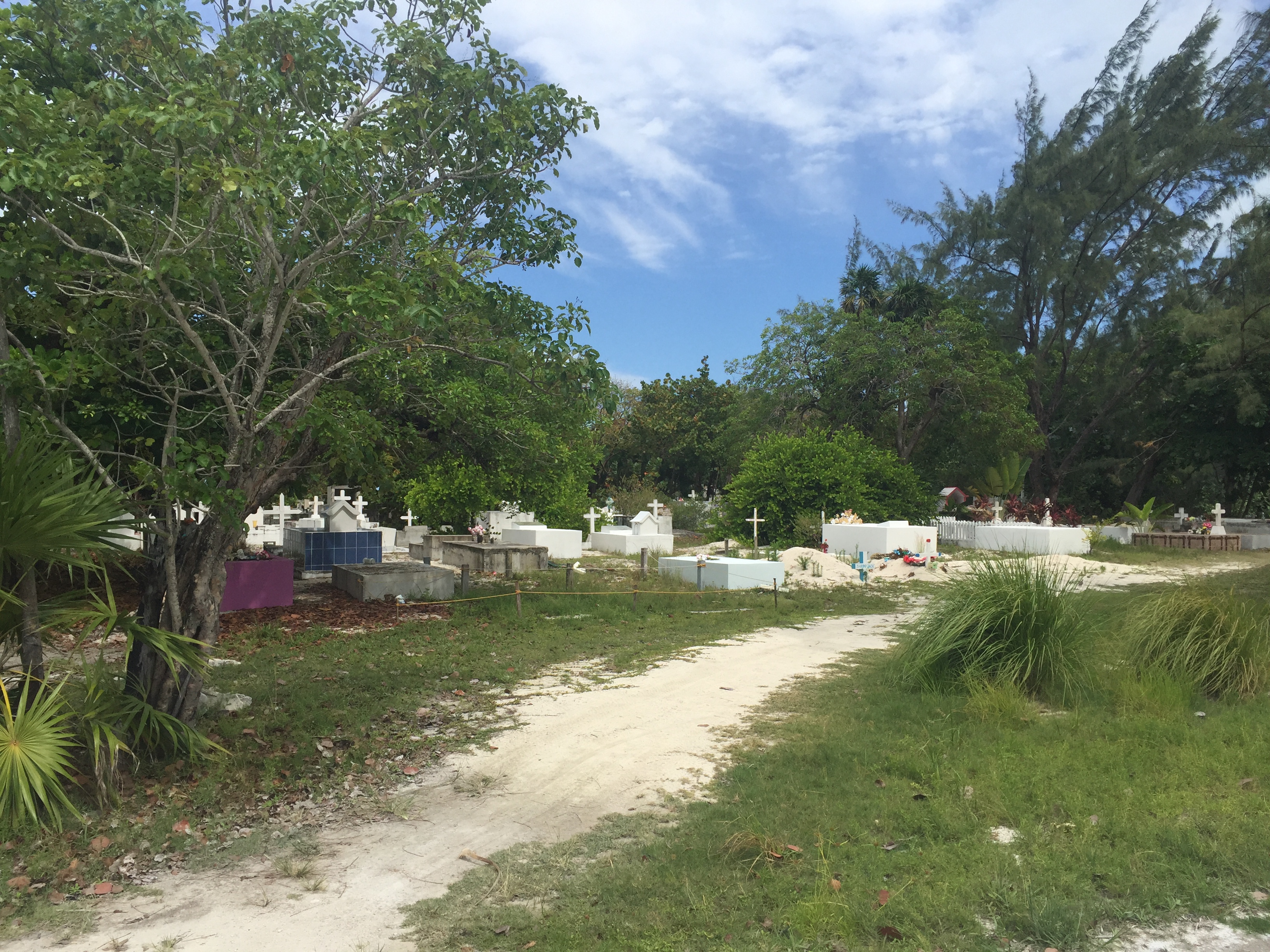 cemetery tucked away on the southernmost tip of the island. In speaking with the guys at the “airport”, they mentioned that someone had recently bought the large property with the resort and had begun work on it. After a few minutes our plane arrived and took us quickly back to Belize city. Easily catching a cab we made our way back in plenty of time to catch the tender back to the ship.

Disappointing that we did not get to see the Blue Hole, but it worked out for the better. We had a fantastic time just exploring on our own proving that the best experiences are not necessarily the ones you plan. 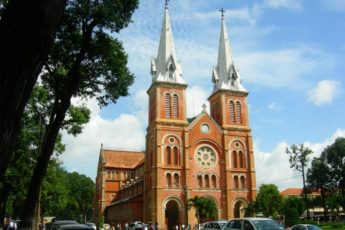