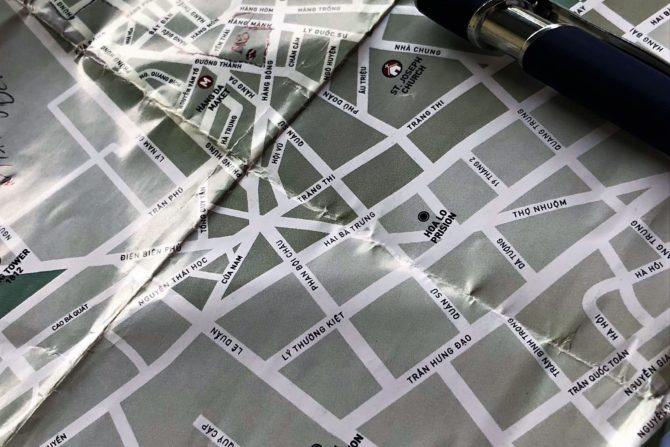 We ended up in Hanoi after our 8-day tour. We had arranged an AirBnb before hand, and it was only about a 15-minute walk from the hotel where we stayed at the conclusion of the tour. The apartment was smack in the middle of Hanoi’s iconic Old Quarter. 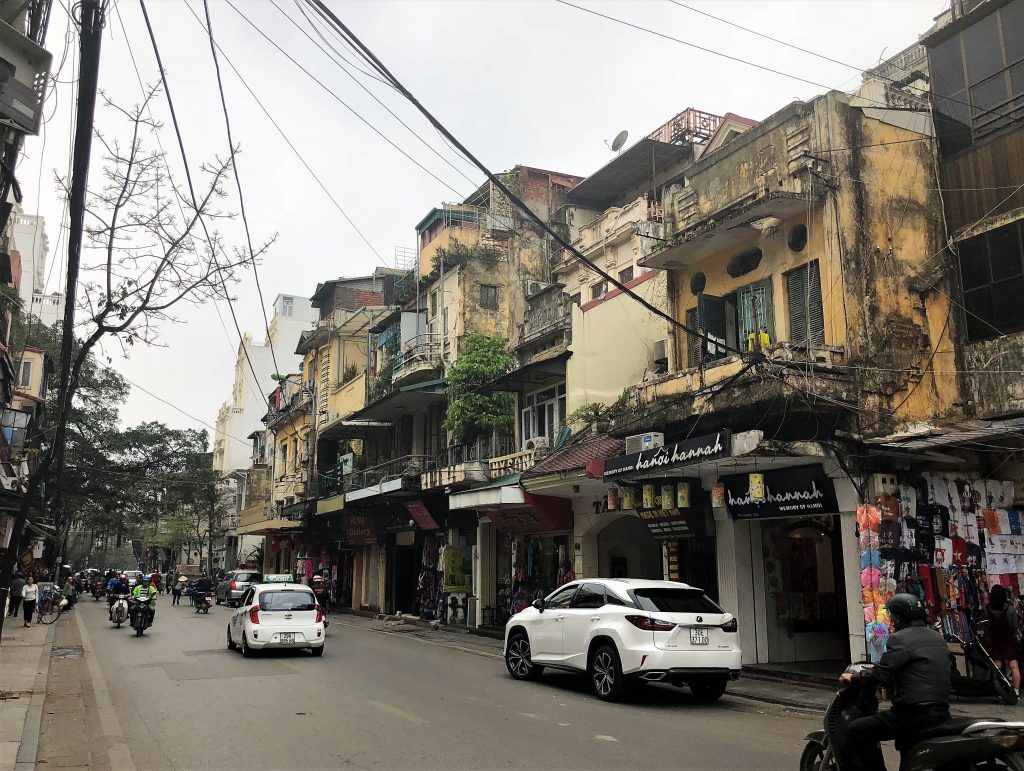 Typical Street in Hanoi with shops on the bottom floor and housing above.

The Old Quarter is a popular spot for backpackers and expats alike. 7.5 million people call this city their home. It is almost an assault on the senses; walking down the street is like nothing I have seen before. It is hard to describe the array of shops that line the street. Restaurants, convenience stores, and specialty shops abound, and similar shops are right next to each other. There are particular streets that are item-specific. One street may have all hardware shops that carry everything from rope and locks to tools and paint. Other streets may be for lighting or party supplies, and yet other streets are dedicated to motorcycle repair or the sale of ladders. Entire streets are laid out like aisles in a much larger store. Some of the shops spill out onto the sidewalk where the proprietors sit and drink tea, talking with their neighbors while waiting for a sale. 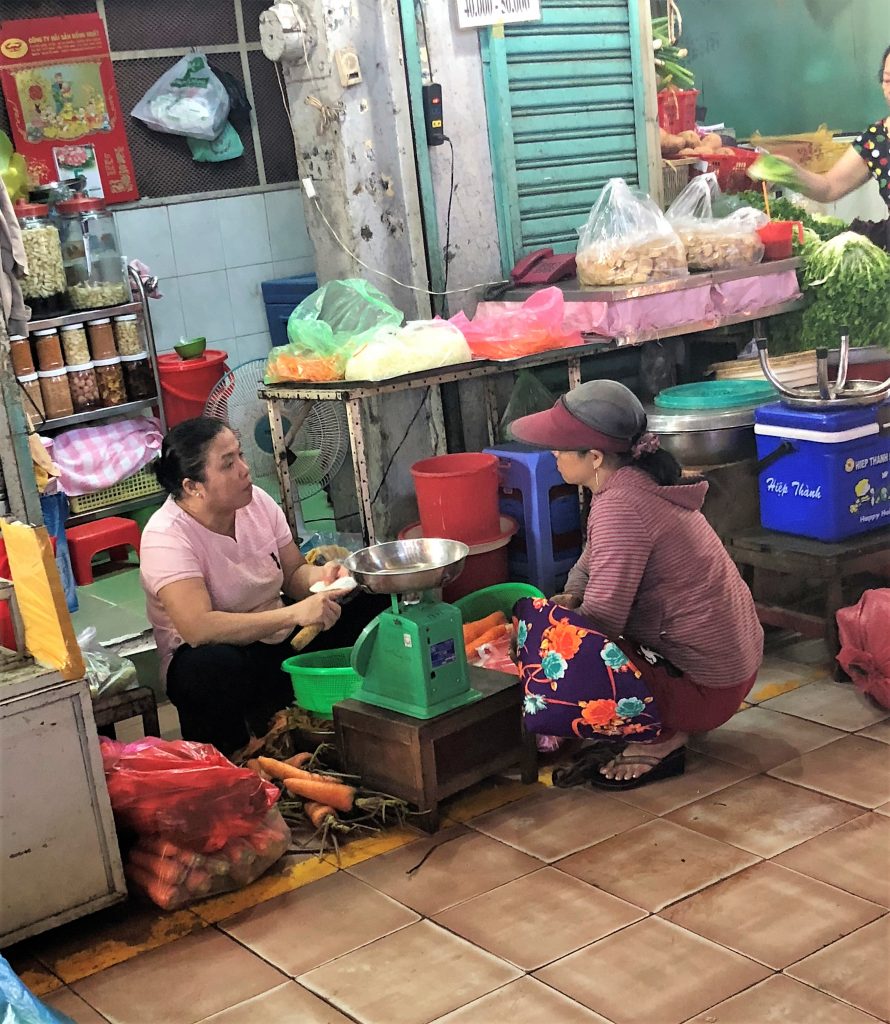 The parts of the sidewalk that are open are for motorbike parking or the small street vendors that have shoehorned themselves into a small spot. These vendors are usually the street food where locals stop for a quick bite. They have small plastic chairs and tables that constitute a makeshift restaurant on the sidewalk. These vendors usually only serve one thing, so menus are not necessary. Just sit down and enjoy! 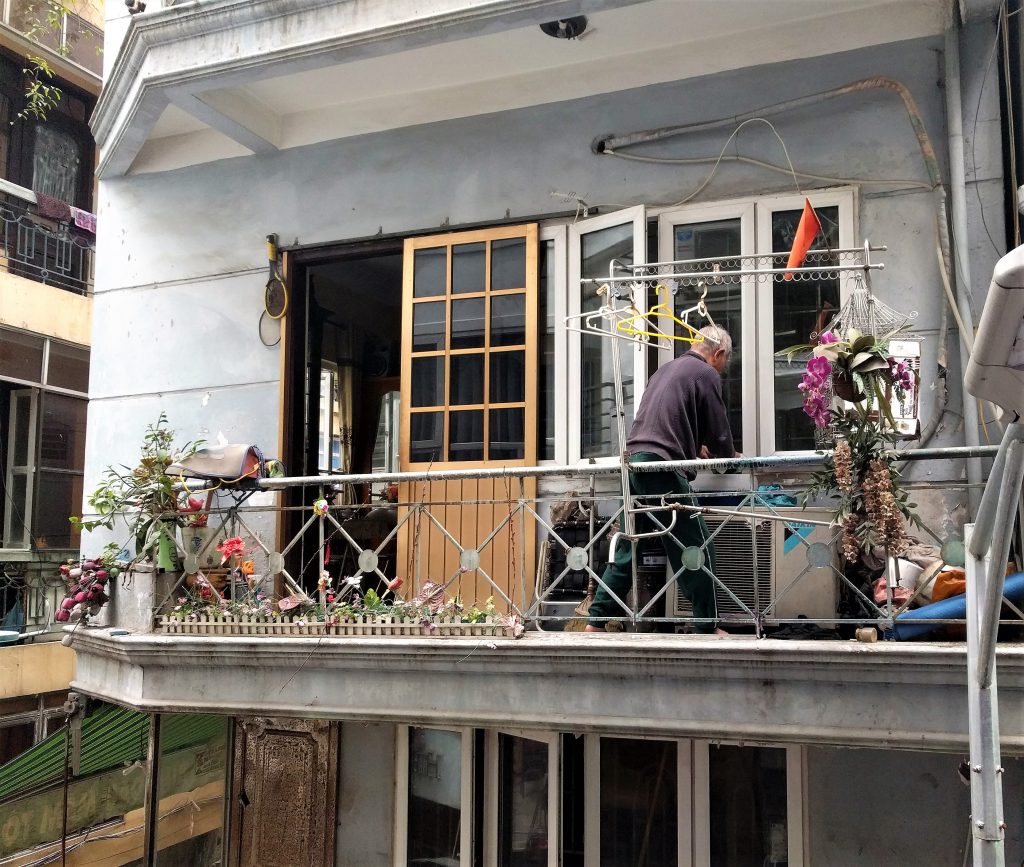 Life above the streets.

A look up in Hanoi will provide a view into the local culture and daily life. Above most of these shops are the homes and apartments of the shop and restaurant owners. Laundry hangs on balconies, and elders sit and watch the world pass by below. We were staying in one of these apartments. To get to our apartment, we had to make our way down one of the many alleys that take you away from the main road. 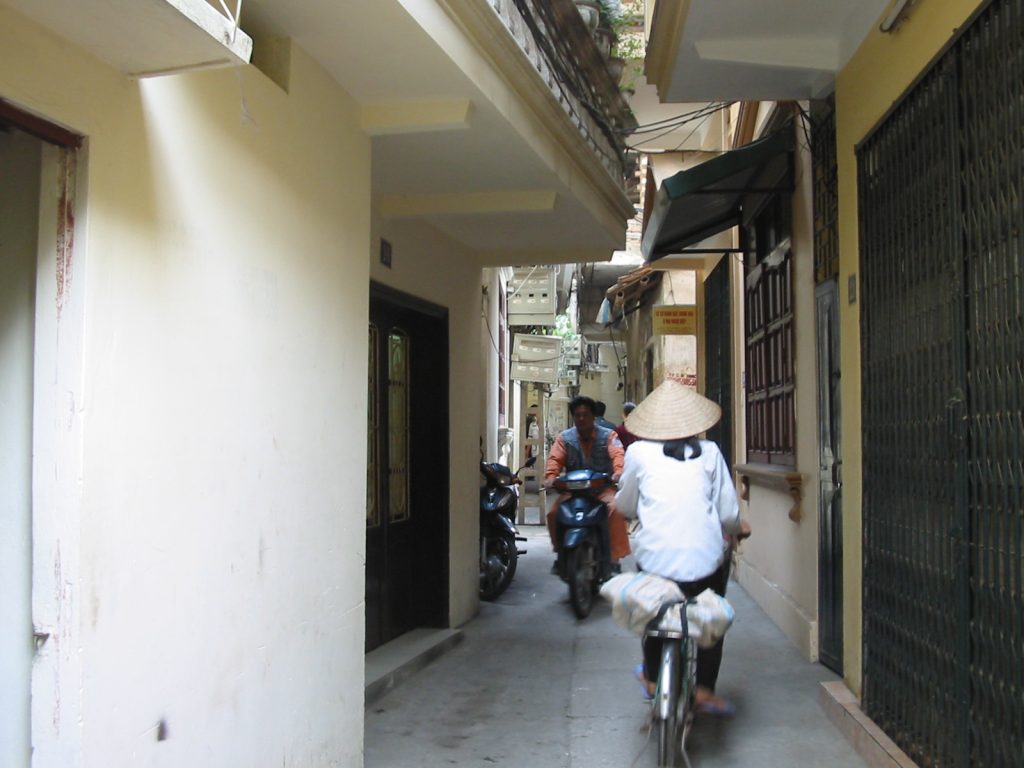 Traditional Alley or Hem in Hanoi

Alleys or “Hẻm” are the mazes in between the streets and the way into the center of a block and away from the main streets. This is where you get to see the real Hanoi and have an experience different than anything you will see on the main streets. Walking down these pathways, you may see a family sitting on the floor sharing a meal or watching television. Some of these paths are so small that neighbors can have conversations through the open doors and windows. The pathways are also common areas that may have laundry hanging and definitely a few motorbikes parked out front. Our particular “Hẻm” was a dead end with our apartment at the end. 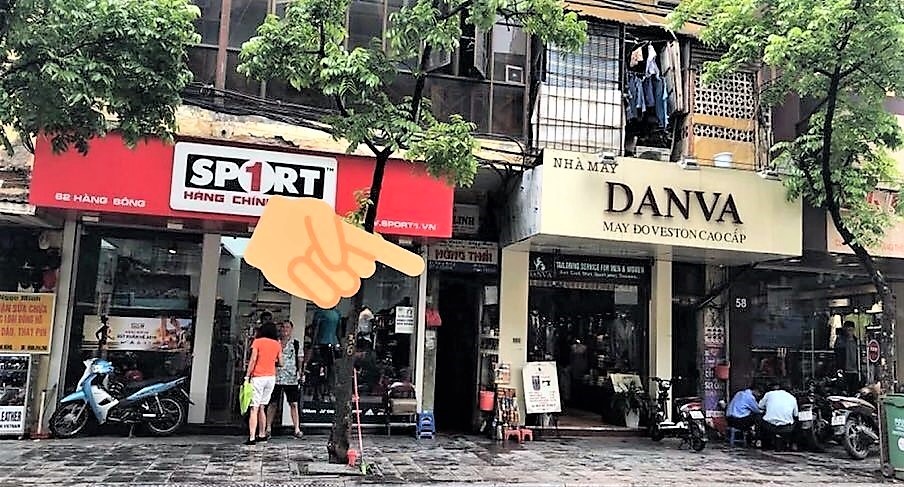 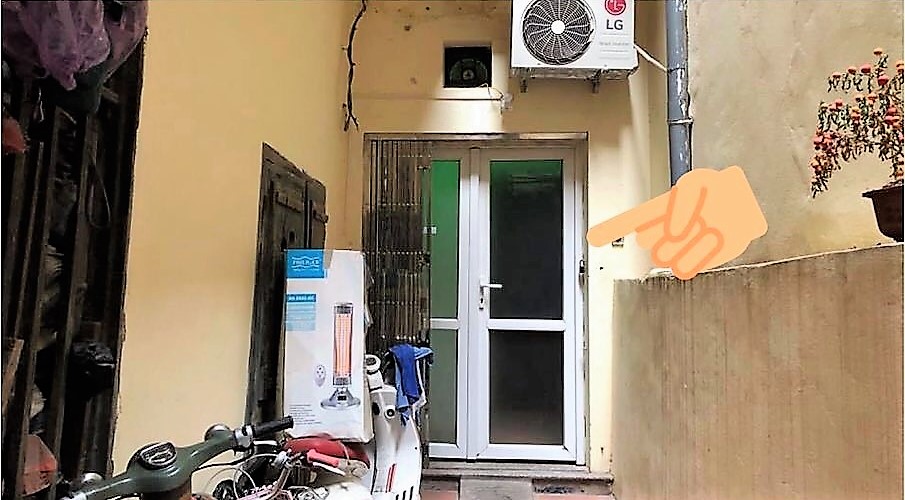 After we noticed these alleys, we got excited to explore more of them. Many actually cut all the way through a block to the next street. We discovered that they come in varying sizes and even have restaurants and great treasures to be found  at the end of some of them. After the sun went down, you could see bright LED signs advertising spas or noodle shops. Many are just for residents and can look pretty sketchy, so we came up with our own 1-5 rating system. A 1 would be a well-lit and traveled alley with at least one sign for a business like a restaurant. A 5, however, would be a long, skinny, dark alley with maybe a flickering murder light 100 or so feet in. 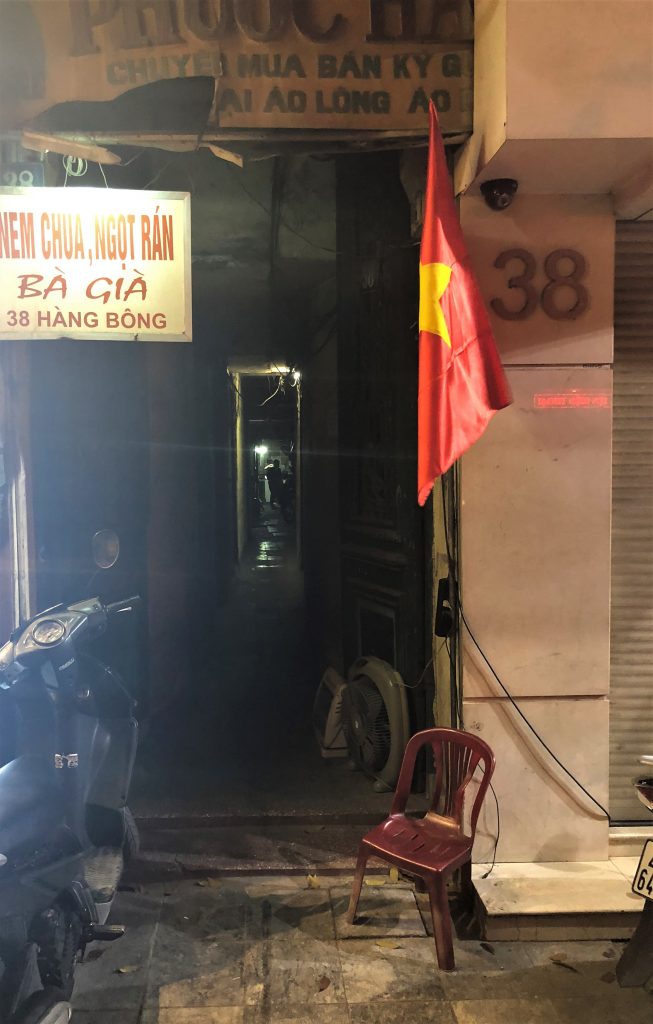 5 on the scale. I think that guy down there may be looking out for the Cops! 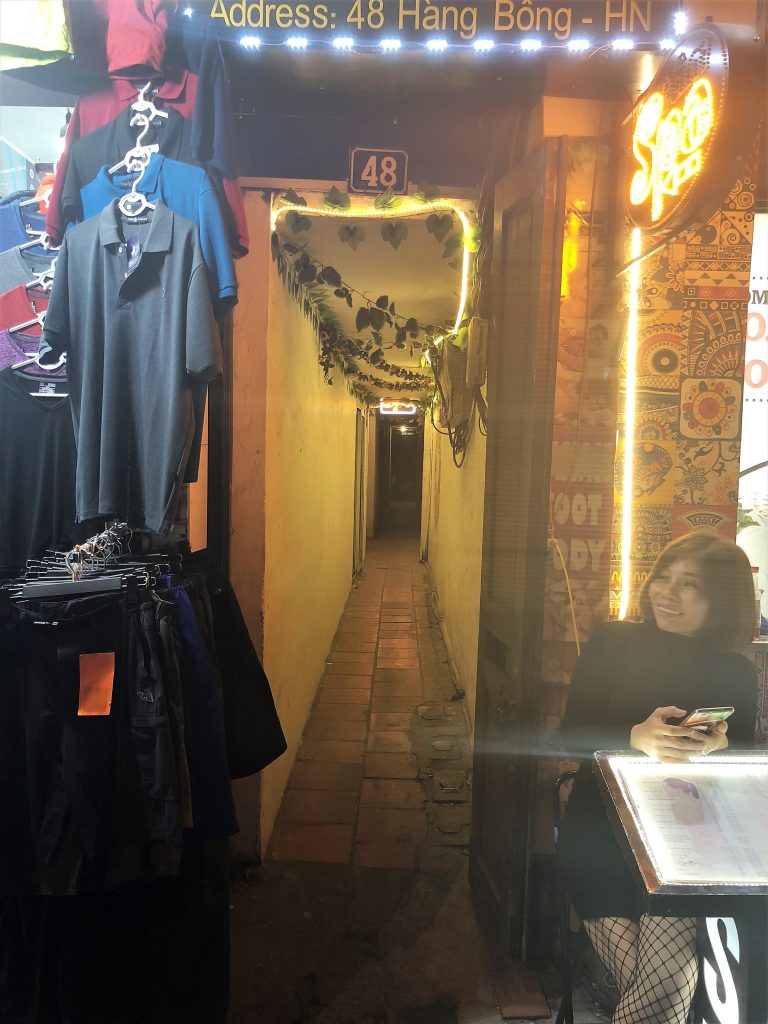 1 on the rating scale. Well lit and clean. Safe!

We stayed in Hanoi for 8 days and got very familiar with the Old Quarter. We would set out in the day to explore and find something new. It may have been a trip to the Đồng Xuân Market or just a stroll around Hoan Kiem Lake, but there was plenty to do and see. 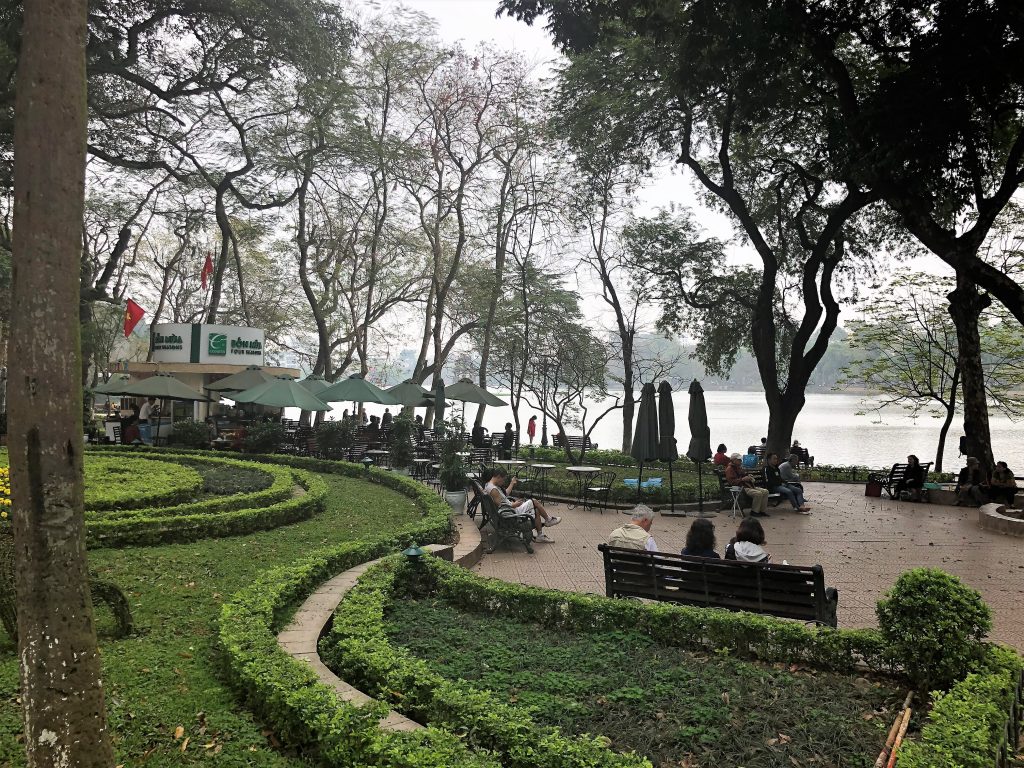 We found a secret café that serves delicious egg coffee and has an amazing view of the lake. The entrance is through a tailor shop and up the stairs in the back. 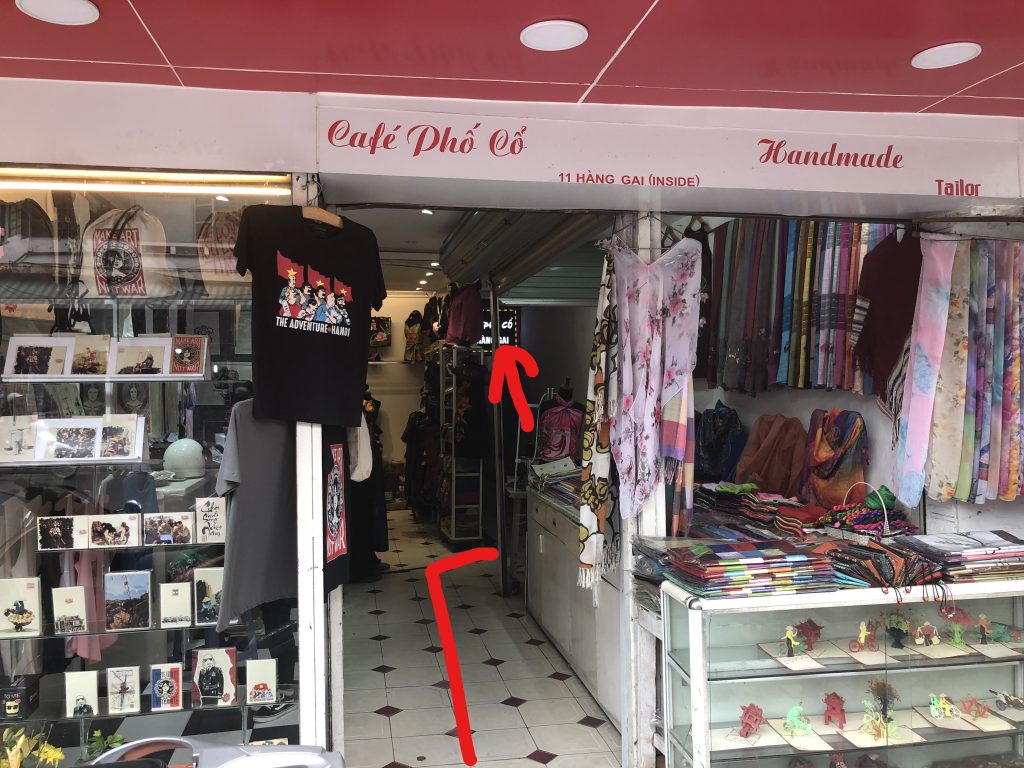 We attended the Water Puppet show, and even though we did not understand a thing being said, it was still a fantastic experience. 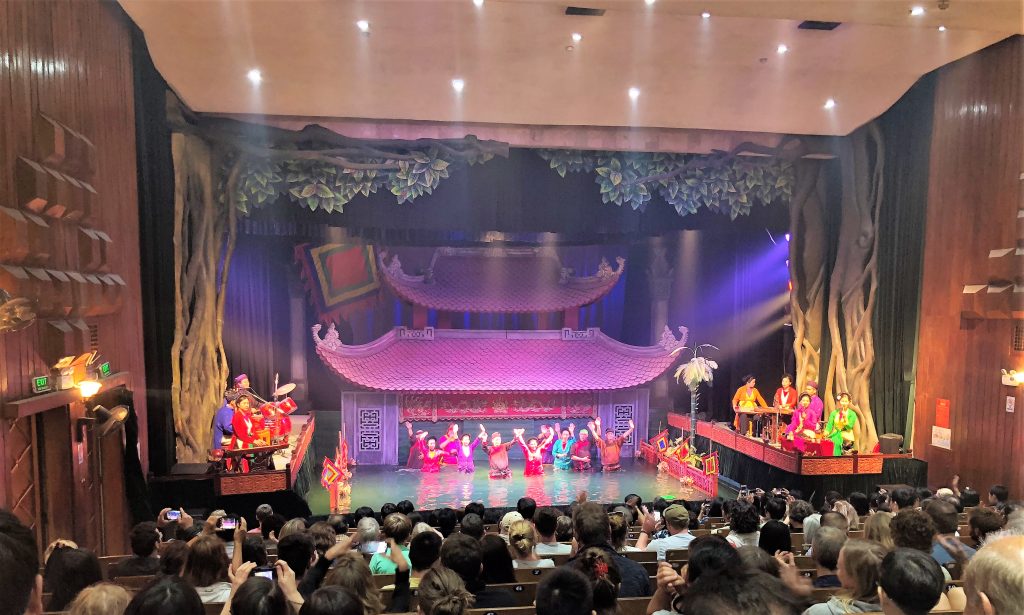 We went on a walking street food tour that helped us understand what the heck was going on and how to eat like a local. We found Hanoi’s famous Train Street, where people live in houses that face and are just feet away from active train tracks. The train comes through a couple times a day, and this experience is as cool as it is scary! 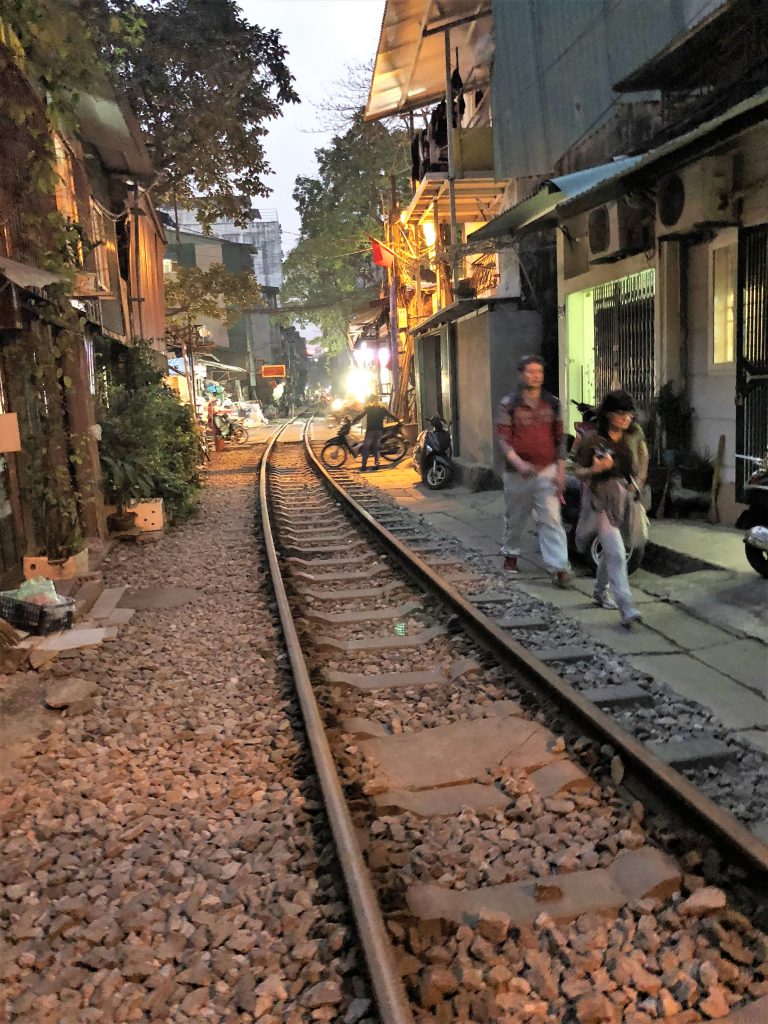 One cannot go to Hanoi without experiencing Bia Hoi! Bia Hoi is an evening social ritual that brings locals and travelers together for cheap local beer and food. Lined up on small, colorful plastic stools, people share stories of their day and life. Local fresh beer is served in old green glasses for about 50 cents each! They keep track of your consumption on a small clipboard left at the foot of your table or stool. It is easy to spend a few hours here and not even realize it. It was one of the best places we found to meet and watch people. Since we are on the subject of beer, we also need to talk about Beer Street! This is a small road about a block long that is lined with restaurants serving amazing food and lots of cold beer. Girls are dressed representing Tiger, Heineken, and La Rue beers, holding menus to entice walkers to sit, eat, and drink. 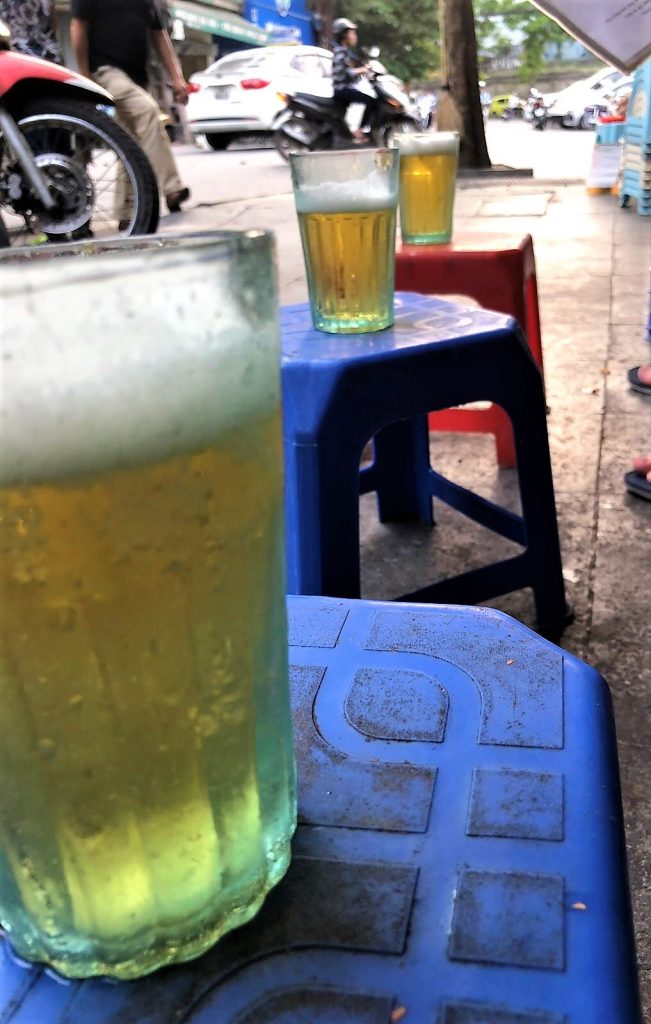 The restaurants spill out onto the street and the signature plastic tables and chairs of Vietnam create a choke point, making it impossible to get through without these girls speaking to you. We went one day and had our meal interrupted by the local rozzers! We were enjoying a cold beer and some food when everyone on the street started freaking out. Our table was picked up right from under us and carried back inside the restaurant. We were corralled inside and told to sit while other restaurants were doing the same to their guests. We looked down the street and saw a truck filled with police, and they were slowly making their way down the street, shouting into a bull horn as they went. We were kind of freaking out a bit until the cook of the restaurant (who was casually smoking a cigarette he had obviously filled with pot) told us that it was normal for the police to come through and clear the street of the tables and chairs. They were not actually allowed to do that until 4pm. 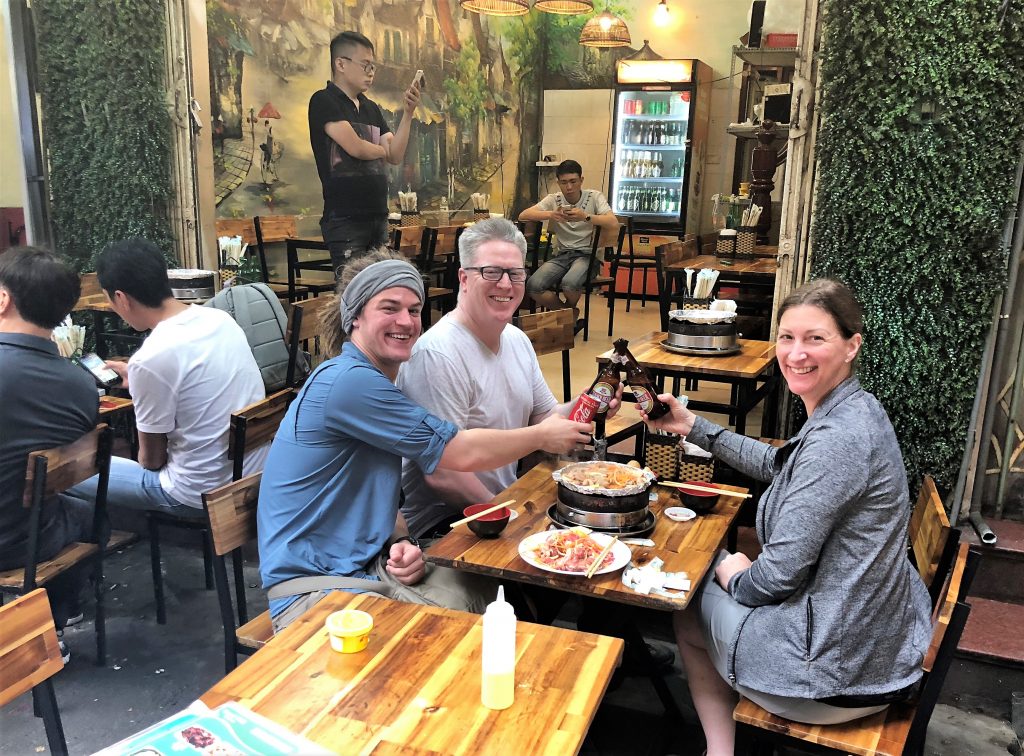 US on the street right before the Rozzers came and we were moved inside.

Traffic in Hanoi is another matter to share! According to recent surveys, there are approximately 4 million motorcycles in Hanoi.  Dodging cars, buses, and pedestrians, they move like water through rocks. It is hard to figure out the rules of the road, so we just went by the rule of lug nuts. Whoever has the most lug nuts wins! Horns are used to let others know you are there, and there are a LOT of horns! Unlike the States, traffic just moves and works. The lanes and lights are really more of a suggestion. No one gets angry or upset; they just carry on. If there is room for bike or a car to get through, then there is a car or bike that will get through. A two-lane road could have a bus, a car, two motorbikes, and maybe a bike on the sidewalk trying to get around the next corner. 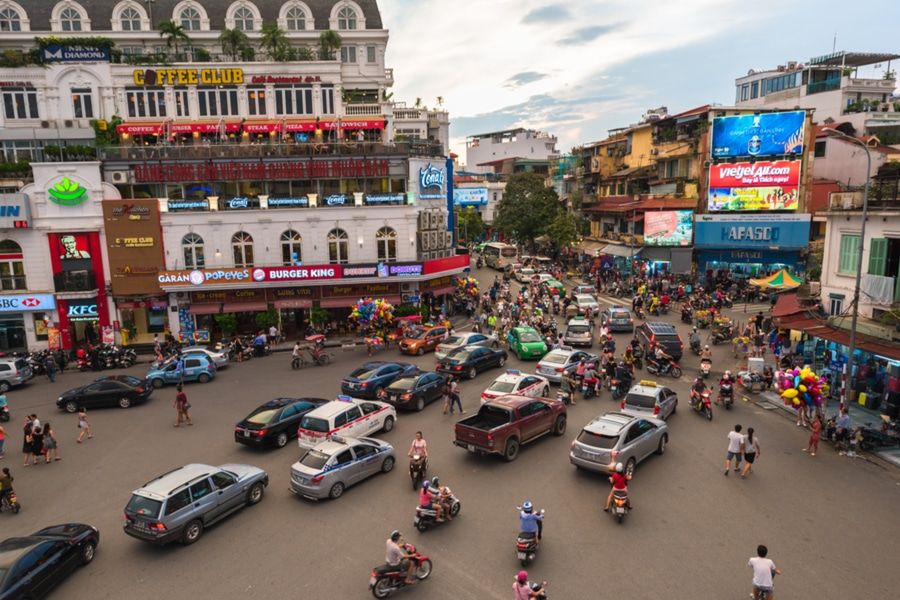 One-way roads are also a suggestion, as drivers just do what they need to so they can get where they are going. Did you happen to make a wrong turn? No problem! Just stop in the middle of the road and back up in heavy traffic, or even better, you could simply try a U-turn or a 3-point turn to turn around! Being a pedestrian in this city is not for the faint of heart. If you need to cross the road and you wait for an opening in the traffic or for it to stop for you, I can assure you that you will die of old age waiting for that to happen. You basically wait for a gap in the cars and buses, then step out into the river of motorbikes. Keep a steady pace, and just keep moving. The motorcycles will simply move around you. They may honk, but do not be alarmed! They are just letting you know they are there and coming. DO NOT STOP! The riders are judging their route based on your expected movements and the pace you are going. If you stop, you could cause an accident. I would also advise that you try to avoid eye contact, as this can also cause confusion. If you are scared, find a local, and they will help you. Then, you can both have a laugh! 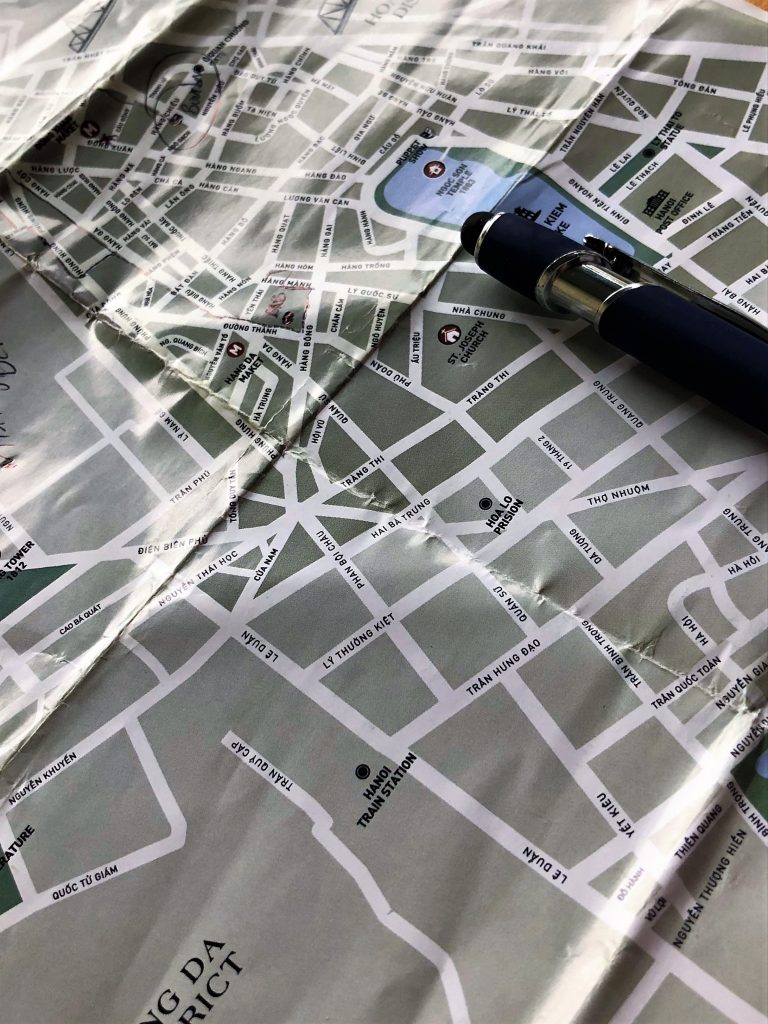 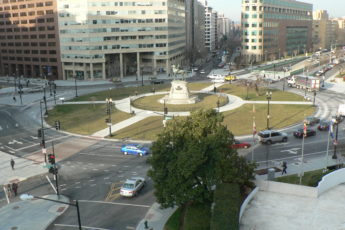 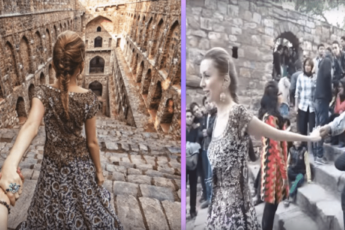