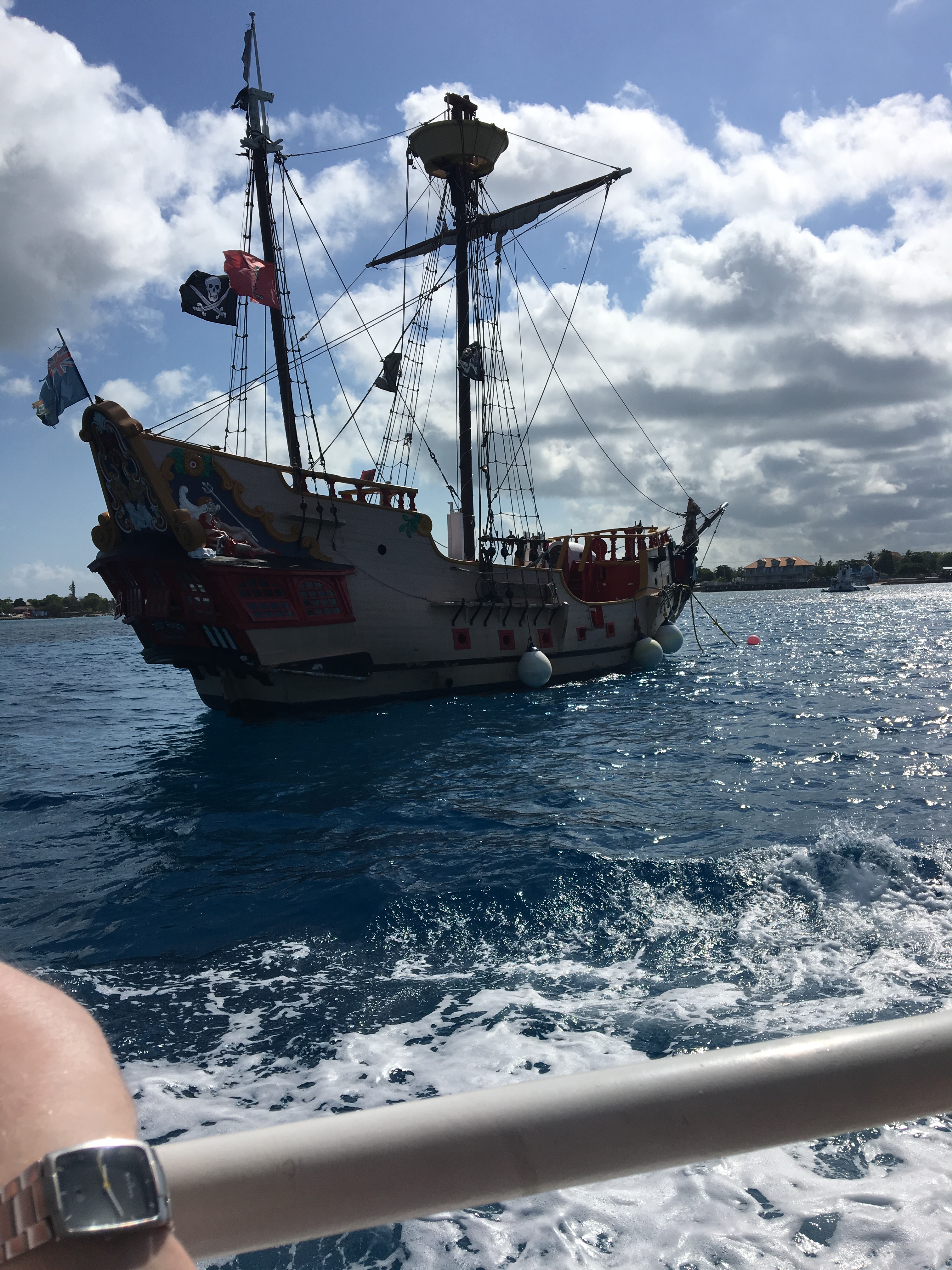 After two relaxing days at see we woke up on the third day to Georgetown, Grand Cayman. During the previous two days at sea we had attended a few presentations on the ship about our upcoming ports.  4 of the 6 ports were identified and “shopping ports”. Shopping is a big part of tourism and even a bigger part of cruising. We learned about how and what to buy. They informed us that we were on one of the last cruises of the season and that great values where to be had. We learned about a rare gem called Tanzanite and that the Caribbean was the absolute best place to buy. In some cases you could buy a stone for up to 40%  below market value. All purchases were backed up with an American certificate of value.

I will admit we bought into the hype. We disembarked the boat  with the cruise line’s shopping consultant leading the way. We loaded onto a tender to take us to shore. We left the security area and marched directly to Diamonds International. As soon as we walked in our “shopping consultant” greeted all the employees in the store. It was obvious that they knew and had a relationship with him. At this point I began to wonder if he was here to help us, the store or himself. We wandered around the store and looked at some beautiful jewelry. I am looking at the price tags thinking how many months that I could travel on just one pair of earrings. The idea was to find a big loose stone at a great price and then sell it for a profit. We started to look at a few stones and the price tags attached. Soon we realized that we had absolutely no idea what the heck we were doing! What the heck is Tanzanite? Why are they trying so hard to push it? Is it really of value? Honestly we had no idea. So we did one of the smartest things ever . . . we walked away. We decided that if it was a good deal that we would be back one day right? Best to do some of our own research away form the hype and emotions of the trip. Our shopping focus then turned to the important stuff. I needed a visor to shield the sun and we were both thirsty! 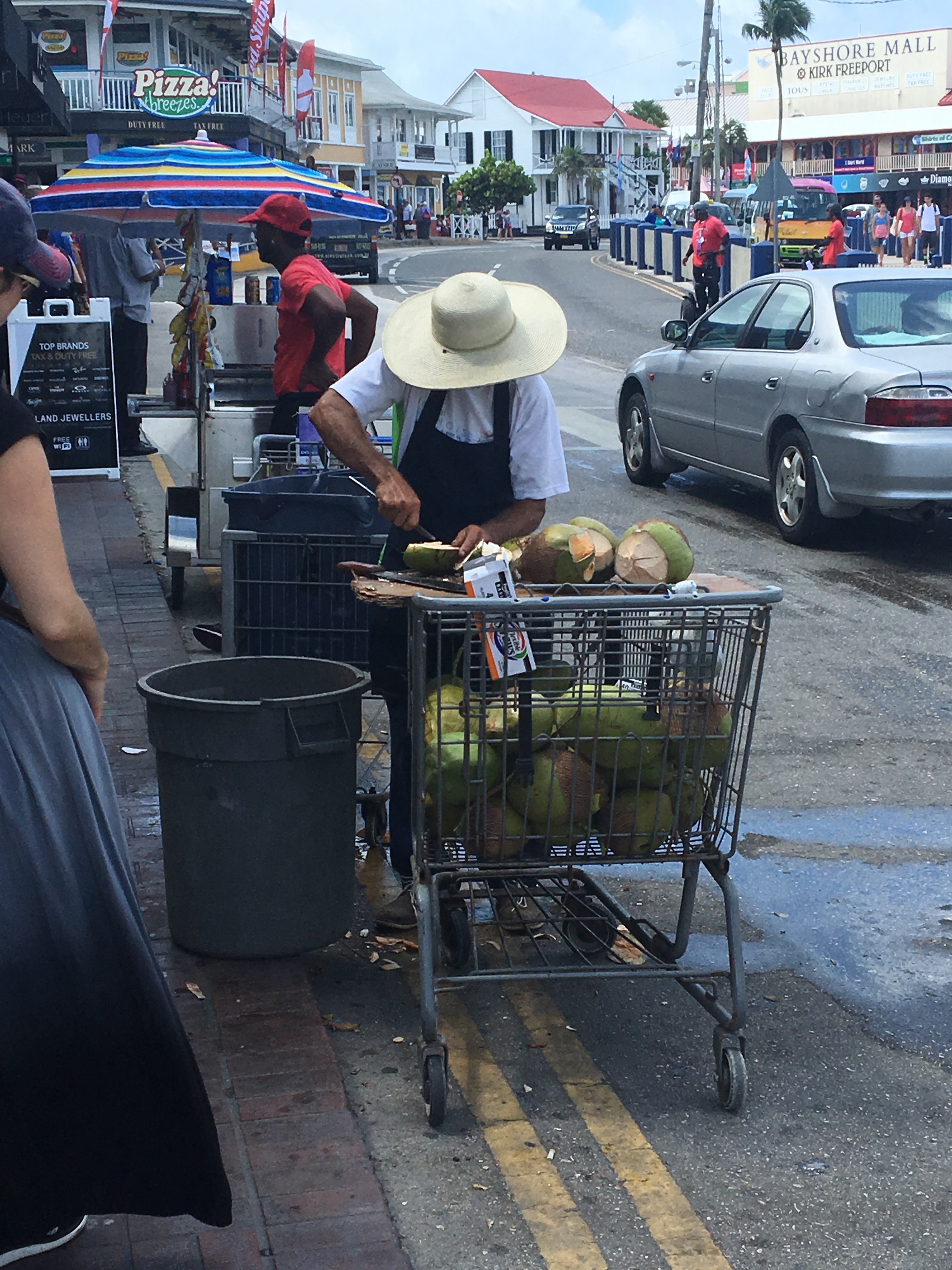 Walking out of the air conditioned store we began to really see and feel our environment. It was beautiful day. It was around 90° F with humidity about 85% and it was beautiful. There were 3 cruise boats in port. There was a Carnival boat as well as a Disney Cruise Line boat, so it was crowded for sure.

We decided to attack the thirst problem first. We followed music in one of the main shopping areas to Jimmy Buffet’s Margaritaville. Okay, let me explain. We had American cash but, at the time all we had was $100 bills. We were uncomfortable opening a wallet full of big bills. We figured that that the big chain location would be a safe place to break a bill into smaller denominations. We also hoped to get a few tips from a local. Breaking the bill into smaller denominations would turn out to be a waste of time in Grand Cayman. More on that later. This place was exactly like every other Margaritaville you have been too. It was nothing special. Full of drunk people doing things they could have done at home.

When we travel, we search out the “non touristy” things. Don’t get me wrong, touristy things are touristy things for a reason. If we were going to be in a location for several days, of course we would see a few of those things. With only a few hours in port we have to be selective on what we do with our time. After a stressful 1 1/2 hours in the jewelry store we just wanted to relax. In Georgetown there is just one answer. 7 Mile beach. Walk 10 feet in any direction and there is a taxi driver wanting to take you there. We hopped in an air conditioned van and headed to the beach.

We were taken to a resort that we paid $2 a piece to get into. They had security, a couple bars and lots of beach. Chairs and umbrellas were available for rent. about $30 would get you two lounge chairs and an umbrella for some shade for the day. We decided to just park it in the sand. I immediately went for the water.  If you have never had the pleasure of swimming in the Caribbean, add it to your bucket list. I can assure you that it something you just have to do. The water is a beautiful 87°! I just floated in the ocean for about an hour relaxing while Amy soaked in the sun on the beach. After a bit that nagging thirst got to us again so I trecked off to the bar in search of libations. 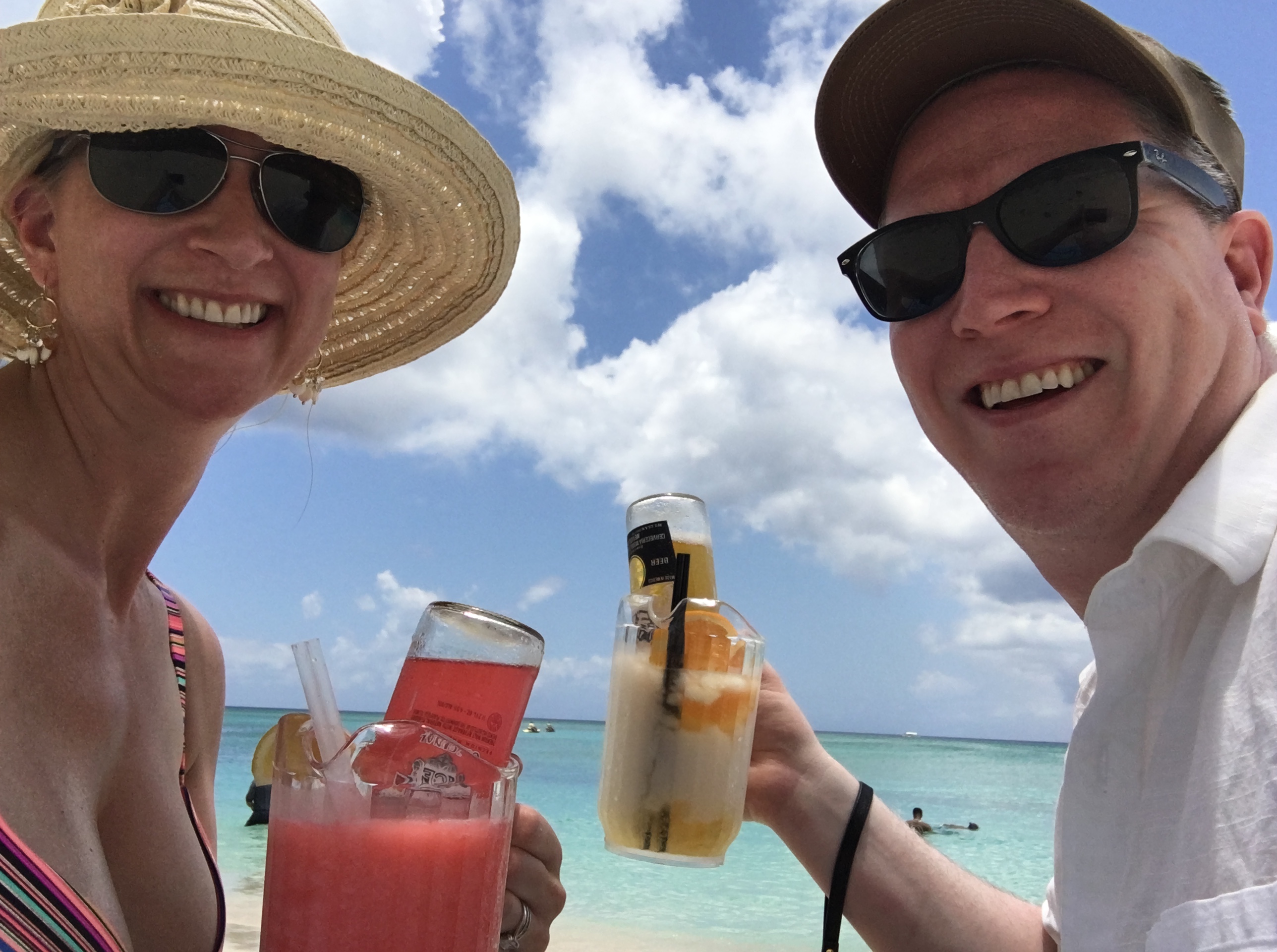 Before ever going to Grand Cayman, my only knowledge came from movies and television. I think of off shore accounts and the uber  rich hiding money from estranged spouses. Corporate hedge funds and Gordon Gecko. In truth there is a lot of money in Grand Cayman. We were walking around trying to buy my visor and perhaps a couple beach towels. We came across a group of gentlemen in hand tailored Italian suits and sunglasses. They were discussing something in hushed tones and stopped as we came around the corner. Remember it was 90°! Anyway, I should not have been shocked when the two drinks I ordered came to $40! I felt foolish stopping and breaking my $100 bill.  The drinks were cool and refreshing. I hoped this was not how expensive the whole trip was going to be.

After enough sun we left the beach and made our way to the adult only pool with a swim up bar. Most all  the staff were American and I loved how most of them just decided to leave the US and work in paradise. Tending bar in the Caribbean is the same as it is in the US with a few exceptions. You are in paradise and most all your customers are on vacation and happy. When you are working in a place like this you get to really spend time learning the culture. You can explore a new and different place. In our opinion that sure beats surfing network news and Netflix at home.

After another drink and a snack we were introduced to the resident iguana. Just cruising around the pool and chilling on the concrete. It was evident that he ran the place and did whatever the heck he wanted.

We grabbed a cab back to the dock and made our way into a trinket shop to get a Grand Cayman shot glass. The line for the tender back to the ship was long and looking hot. We made the decision that we should hat a couple Coronas would help keep us cool standing in line.

The others in the line looked on with envy. after a short ride back to the boat we were in air conditioned luxury. Dinner reservations at the steak house and an overnight cruise to Roatan Honduras. Day three of Not Sucking 2016 in the books!
By Roger
0
7 mile beachAmerican DreamcaribbeancruiseDiamonds InternationalGrand Caymanletsvagabondnew richNorwegian Cruise LinesShoppingTanzanitevagabondvagabonding
N’awlins in about 90 minutes!
Stop 2 – Roatan, Honduras 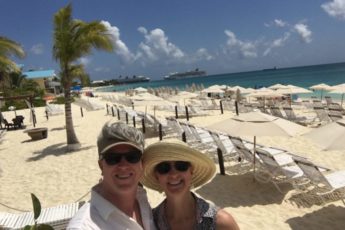