When we talk about long term travel and the decision to leave it all behind, one of the first questions people ask is, “what about your family?”

That is a question that is different for anyone, but I will attempt to respond from Amy and I’s point of view in hopes that it you can see where we are coming from and perhaps relate.

Amy and Roger in 1991 on their 1st wedding anniversary. Dreaming of far away sunsets.

First of all, travel has always been a part of who we are. When we were 19 and 18 just married we dreamed of spending time in the Maldives, Greece, and the Caribbean.  We were just like most people. We talked of vacations and trips we would take when we retired. The plan I suppose, was what is the “norm”. Work hard and take the 2 week vacations every year and then when we turn 65 and retire we could travel all of the time! There is a reality here that is a big problem, the cost of travel as we imagined. I am sure I do not have to explain how expensive travel is as we in the West know it. Airfare, accommodations, food, drinks and of course the t-shirt to let all of your friends know where you went. These costs have continued to rise as more and more people are taking the plunge into international travel. It was not until recently that we learned there is a different way to travel. A way that is not geared to the one or two week traveler, but a secret world only known to those willing to make a few sacrifices and some difficult choices. People like Amy and I.

One of our beloved Thursday night family dinners

So when we decided we were wanted to jettison our careers and possessions for a couple backpacks and a nomadic lifestyle, we checked with our family. Contrary to what some people may think, we did not come to this decision all willy-nilly and without thought. Family is VERY important to both of us. We love our family and look forward to family dinners every Thursday night at our house. We look forward to events throughout the year that have turned into family traditions. Glamping trips in the Summer, local parades and festivals and any excuse we have to get together with our family are just a few. We are all very close and talk several times a day.

Getting ready for the Annual Strawberry Festival Parade. spaces wide and tailgating with about 30 people

We talked to everyone at a weekly family dinner and explained what we had in mind. We told them that we wanted to travel and we wanted to do it now while we knew we could, instead of waiting on some date in the future with an unknown health status. We did not want to plan for a time in the future that we were not guaranteed. In essence we did not want to trade the most productive years of our lives in hopes that “some day” we would be able to fulfill all of our travel dreams. We wanted to do it now while we were healthy and able. We had a great conversation about what impact this would have. Selling our possessions, quit our jobs, missing family events and oh by the way, they may have to store a few things, lol.

We have always done things a bit different so it was not too much of a shock to them. In their eyes, it was just another one of mom and dad’s adventures and they were very supportive. We explained that we would not be able to always come home for every family event. We would miss birthdays, holidays and maybe even a wedding or two, (if that ever happens!). The response was more than positive! The only real stipulation was that we be somewhere awesome when they want to go on a vacations.

They understand how young we were when we started our family. By the time we were 26 and 25 we have four boys, 6 years old and under. It was very important for us that Amy stayed home, so we did whatever it took to make that happen. I worked 2 jobs for many of those early years and Amy started doing newspaper routes at night just to try to make ends meet. In the early years we did not have two nickels to rub together. While all of our friends were going to college, having parties and going to Cancun, we were trying to survive and do whatever it took to make our family work.

We have always known that there would be things that would, without a doubt pull us off of the road and bring us home. Top of the list? Death. The death of an immediate family member is a horrible thing to talk or think about, but it must be addressed.

People die. the reality is that no one will get out alive. My dad used to point at a cemetery when we drove by, point and say, “look that that place, people are just dying to get in there!” A bit morbid I know, but it is the reality and we all need to accept it.

I have spent this week in Alabama and I am writing this in the Atlanta airport waiting to fly home. My mother lost her battle with cancer and has passed. I have spent the last week down south, taking care of her final affairs. My mother was fighting a battle and fighting it courageously. She was one of the strongest people I have ever met and I am not just saying it because she was my mother. That was a sentiment echo’d by friends and family alike over and over this last week. Every person I met had the same thing to say. She always had a smile on her face and danced in the rain rather than complain about the storm.

The whole family on Oregon last year for a family reunion.

In making the decision to travel long term, we had to have the discussion and put in place the parameters that would pull us from our travels. There are plans and protocols for our adventure and we talked at length about what would and would not call for a trip home. This will be different for everybody, but it is something that has to be talked about. It is no less important than where you will go and how you will do it. You have to make known what the deal breaker is. If you are alone, you can be a bit more flexible, but if you are traveling with a partner it has to be discussed.

As another family member told me this week, “life is for the living”. While that is true and we need to live our life in a way that we have no regrets when we look back, we also have to honor those that have made us who we are.

When we lose someone, all we have are memories. Make good ones!

By Roger
0
familytravel
Memories, Love and Regrets
100 Days and counting! 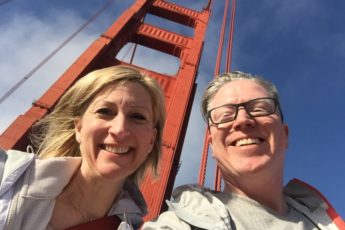