During our First three days we spent a lot of time relaxing and participating in on board activities such as trivia of course. We met a couple from Belle Chase Louisiana which is coincidentally where I used to work in the Commercial Diving Industry. We found we had a lot in common the Mike and Debbie and a friendship started to emerge. His schedule, having weeks off at a time made it possible for them to travel quite a bit. They shared that they had been to several of our ports before. Naturally we were excited to meet someone with some local “street smarts” and asked if we could join them in Roatan, Honduras. 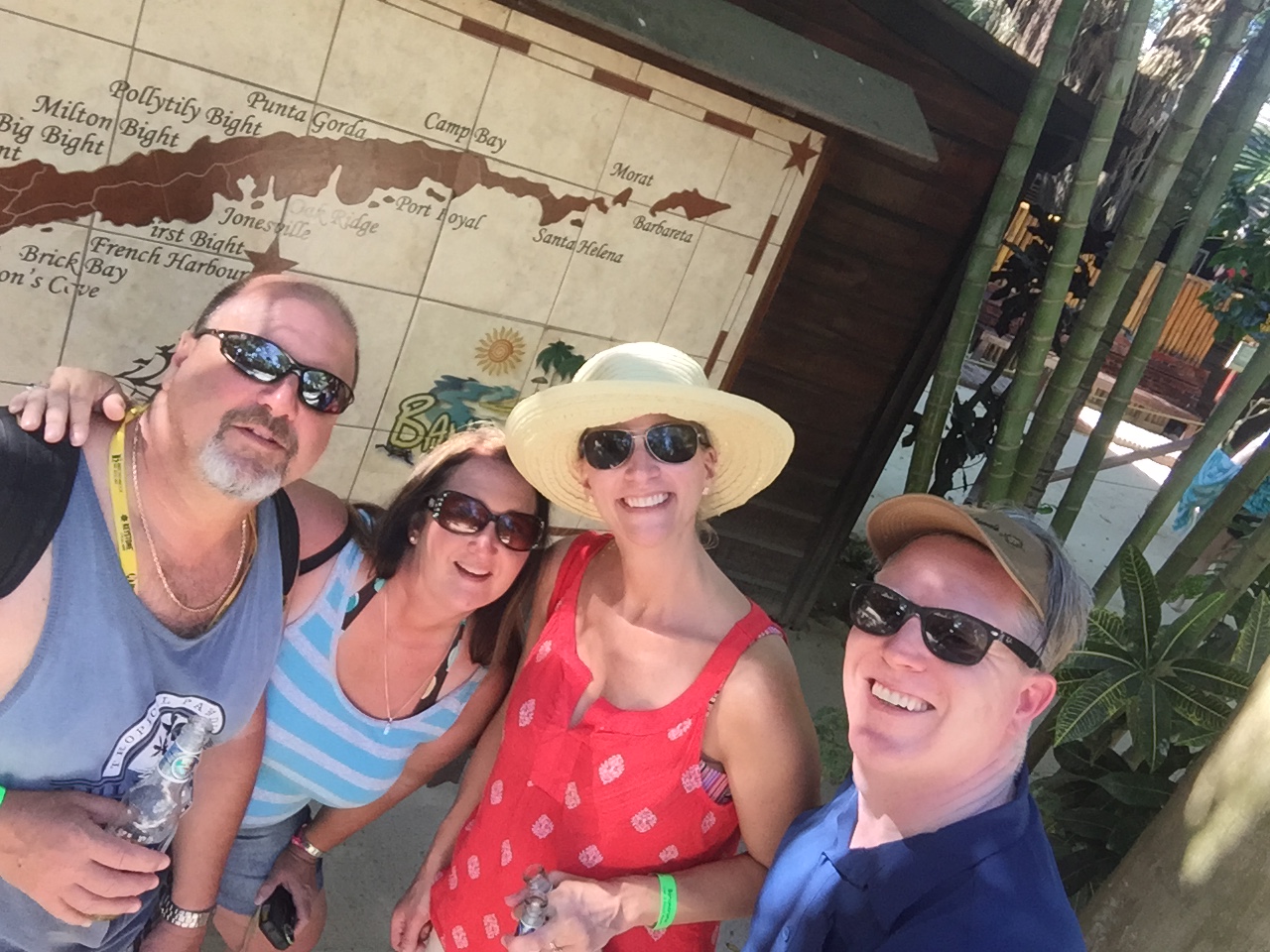 With shorts, hats and a liberal amount of sunscreen we disembarked at about 9am. The port in Roatan has a large dock that easily accommodated our boat allowing us to walk off and right into the circus. The circus is what we call the tourist area right on the dock. This is an area that is usually owned by the cruise companies and vendors pay inflated rates to be so close to the ship. They sell all kinds of wares and trinkets branded in the country of destiny. They will almost always have a few jewelry shops and let us not forget the duty free stores. You cannot walk through the circus without getting barked at to come inside and see the “pretty things for a pretty lady”.  Just past the shops is the “midway of the circus. This is where all of the tour guides are competing for your few precious hours here in their country. Tourism is the life’s blood of a place like Roatan. They also have an economy that is based on fishing but tourism is King. The port is full of people that would love to show you around offering everything from swimming with the dolphins and zip line canopy tours, to Scuba diving and beach going.

Since Mike and Debbie had been here before we just followed their lead. Mike confidently plowed through to circus until we were just outside of the shopping area and approached one of the tour guides. in just a few minutes he had negotiated our whole day. We had hired a driver that would stay with us all day. He would first take us to a Canopy tour zip line then across the island to the north to West Bay Beach where we would spend the rest of the day lounging in the sun and water until our driver brought us back to the ship in the afternoon.

Cramming into the late 90’s Toyota Camry we pulled out of the secure port area and began winding through the quaint little street along the shore and then wining up the hills into the more rural part of the island. Roatan is an island that sits on top of an ancient coral reef and is about 250 square miles with an elevation of about 270ft. Our driver who spoke very little English, pointed out schools churches and government buildings as the air conditioning blew cold air on a beautiful day. As we climbed closer to our destination the road became dirt and a bit rough. We passed small homes with children who were not in school played and adults doing various chores such as hanging laundry. We arrived at the zipline park and it was nestled in a tropical forest setting. It felt as if we had just walked onto the set for Romancing the Stone. While Mike and I were registering for the zipline Amy had already zipped off down the trail to an area with animals. Look Monkeys!

Our guide for the day got us wrangled together and we started up the trail to the first zipline. Everyone always talks about how cool and fun a zipline is. What they don’t tell you is the part they have blocked out from their minds; the horrible climb up in order to zipline down. About halfway up we all agreed that this would be a great point for a beverage stop, alas the operators of the park had did not have the thinking that we did so our idea remained just that. We pushed farther up the hill and finally came to our first platform. We had a great view through the trees all the way down to the water and in the distance we could see our ship in port. 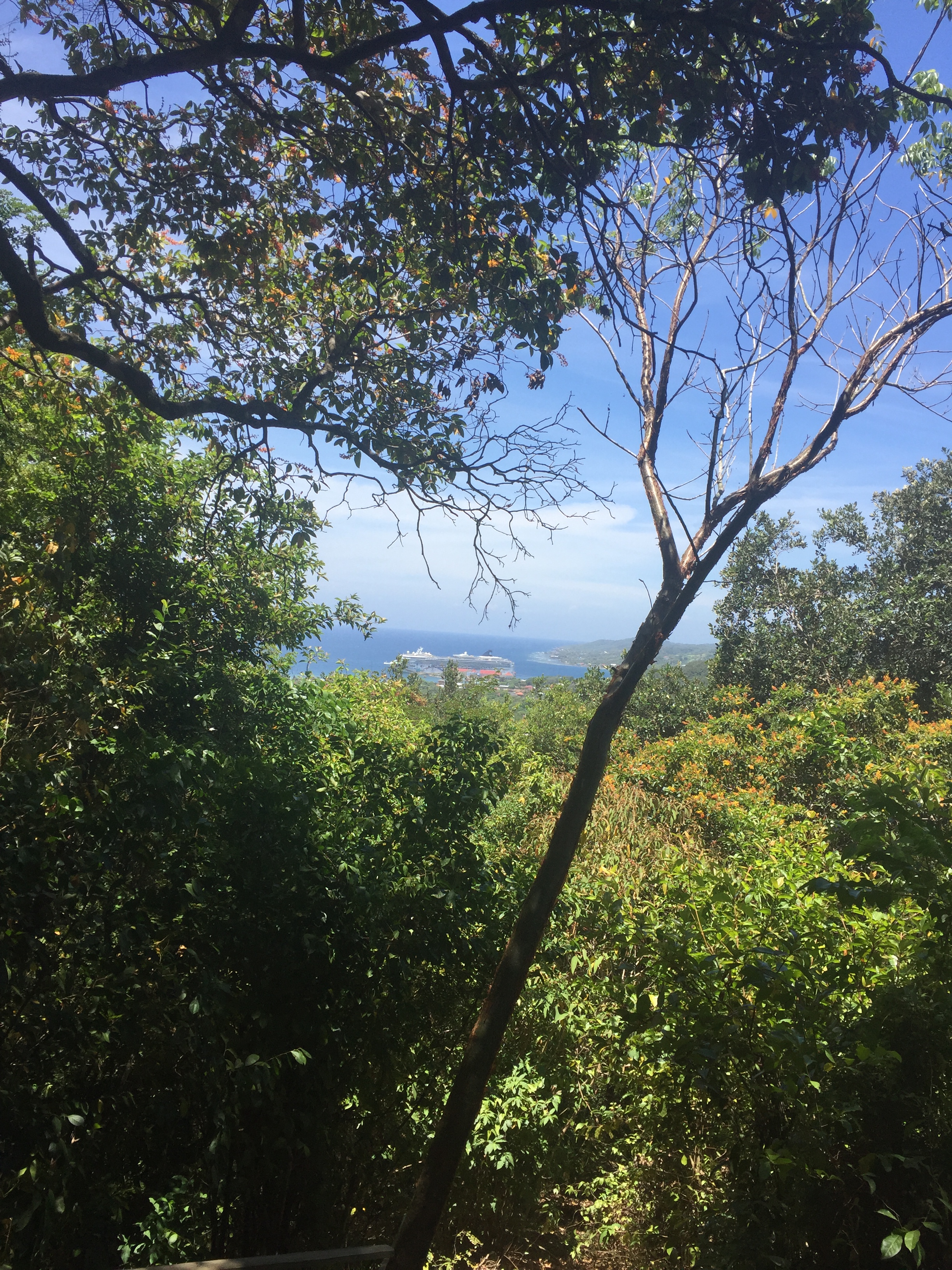 From the 1st zipline platform. View of our ship at port. The Norwegian Dawn.

We got all harnessed up and Amy decided to go first. She later confessed that her bravery to go first was really just wanting to go before she had the chance to see anyone else and chicken out. Harness, helmet and braking glove check! Amy was off like a rocket down the first zipline disappearing in the distance. 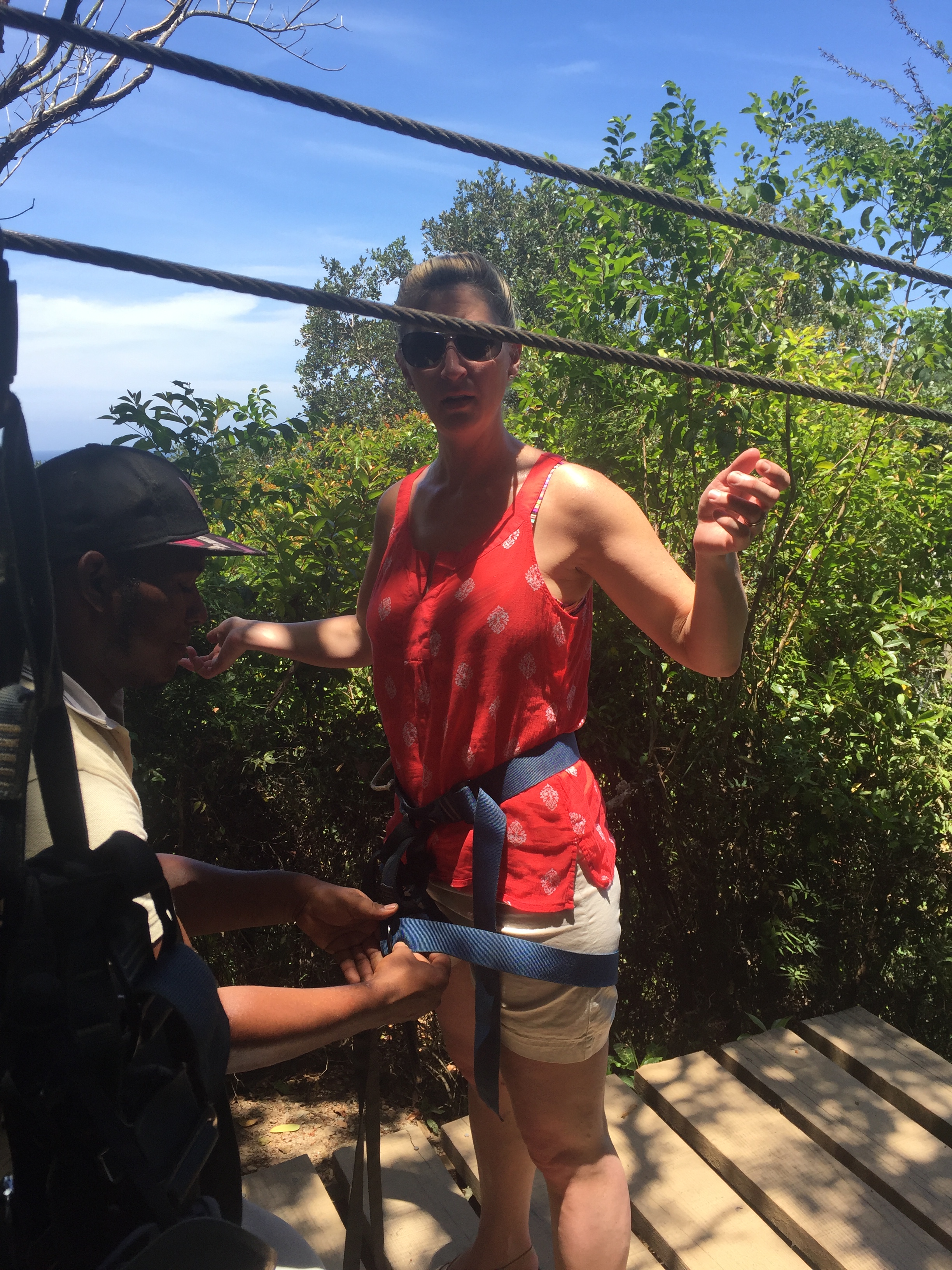 Amy getting harnessed up!

There were a total of 7 ziplines that took us back and forth across ravines and through the trees. We were able to even get a little daring and do some upside down runs and even a no hands superman zip. It was a lot of fun! When we got to the bottom we doffed our harnesses and helmets and went to see some wild life. Tucans, Macaws and monkeys! We got to feed monkeys (even though they were more interested in stealing sunglasses than bananas.) Smaller spider monkeys running wild like pets climbed onto our shoulders and posed for picture and even the Macaw would sit on your arm. This was a far different experience that we had ever had by just going to a zoo. It was very cool. 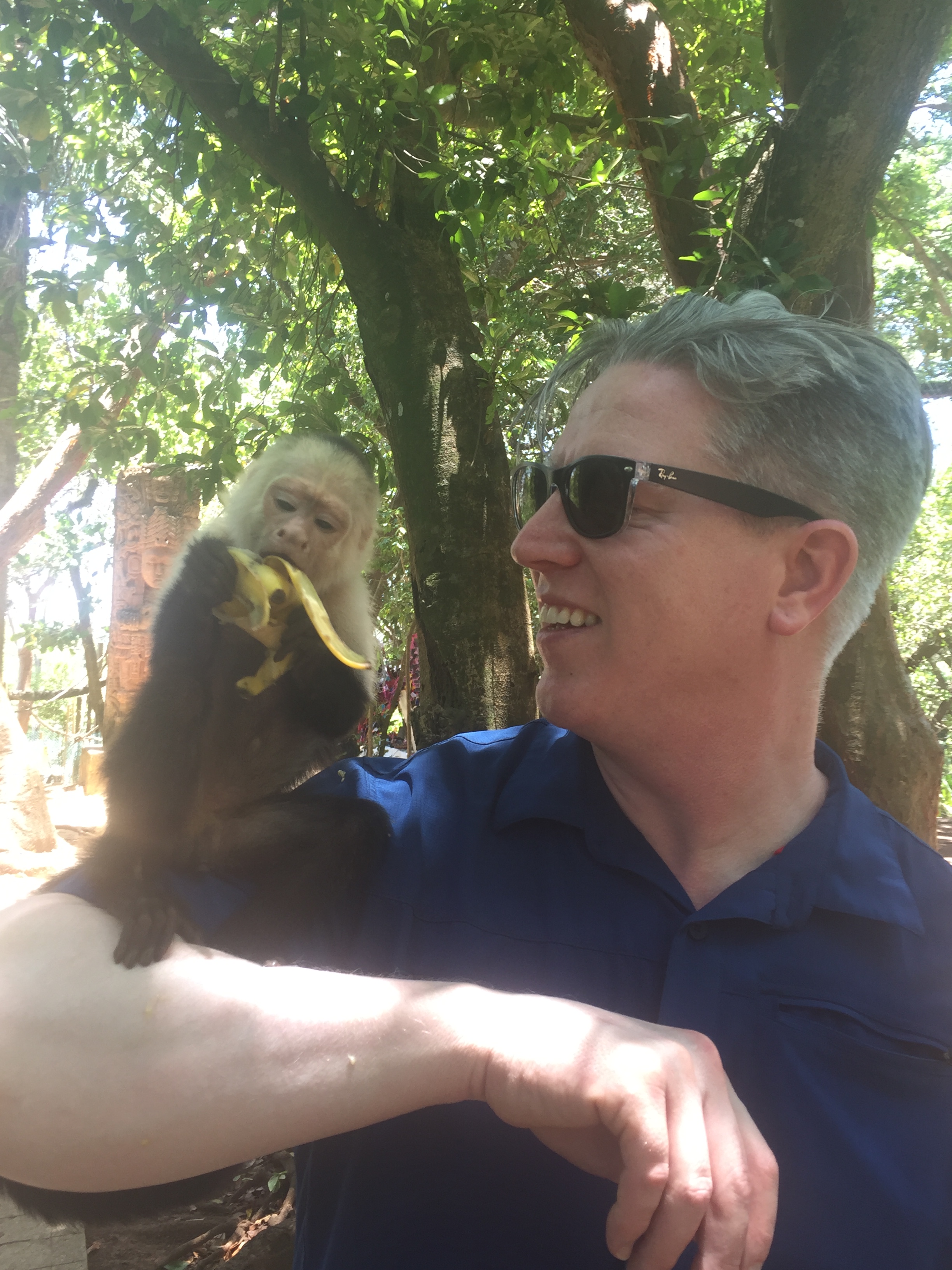 Roger with a new friend!

We found our driver and loaded up for the second part of the day, West Bay Beach. The entire island is only 5 miles wide and 28 miles long. We realized after a bit that the driver was not going directly to the beach but, was taking us the scenic route. That was fine, as the island is beautiful but with very little English he was not able to really share much about the island and his culture. It was only when we kept asking him to stop for a beer that he straightened out our route and got us to the beach. 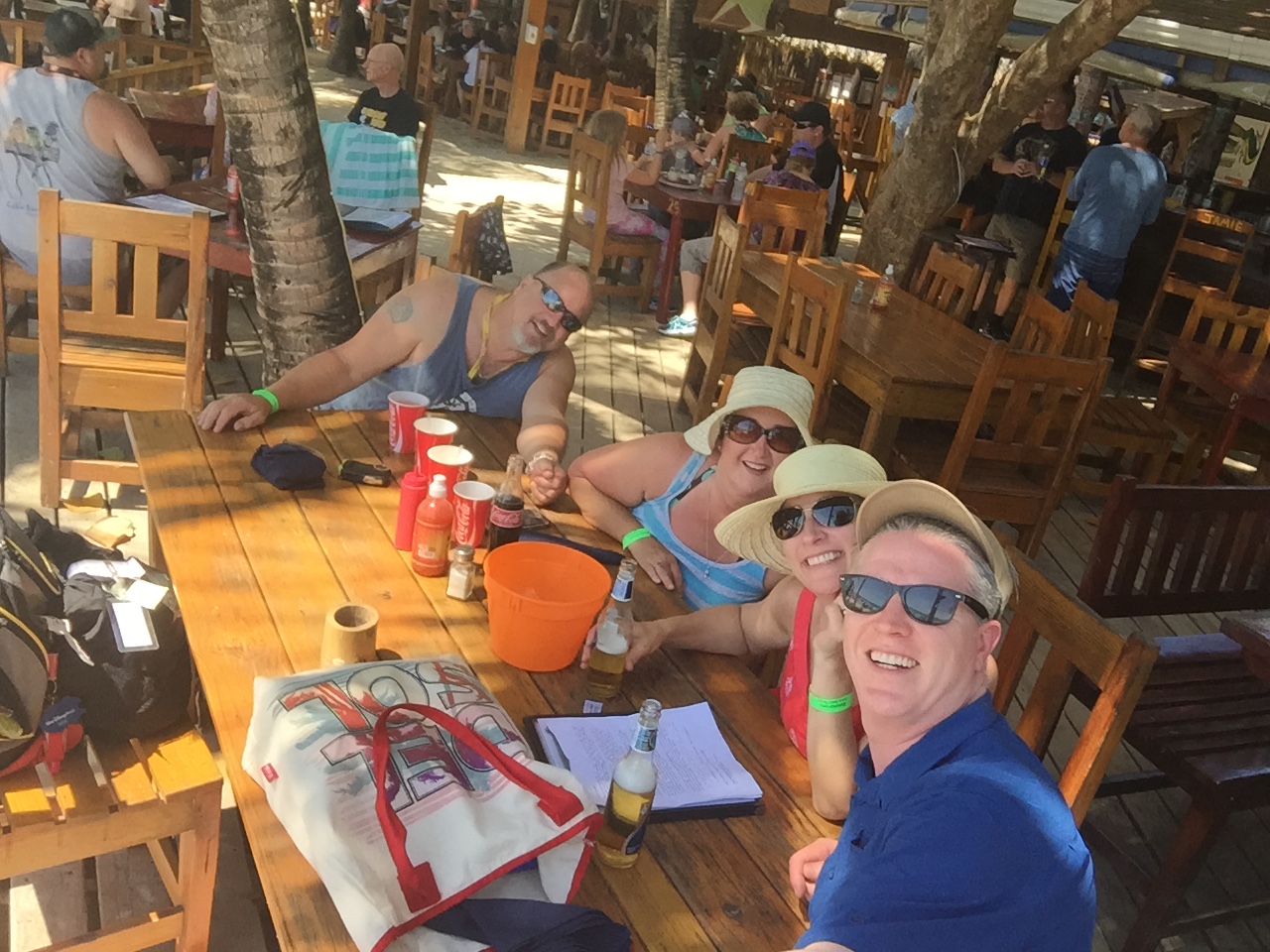 When you are traveling like this, the tour companies have very specific beaches they will take you. The tour companies have relationships with certain beach resorts to get the tourists to them. We were taken to a place called Bananarama. This is a beach resort with rooms, three restaurants and a lot of other amenities including internet access if you really need it. We paid a $10 day fee for access and quickly found a nice table in the shade, on the deck overlooking the beach and the amazing blue water of the Caribbean. We were of course thirsty so we ordered a bucket of the local beer and some fresh calamari. We spent the afternoon just relaxing and getting to know our new friends better. Sharing stories and laughing in this little corner of the world felt like what we were made for. 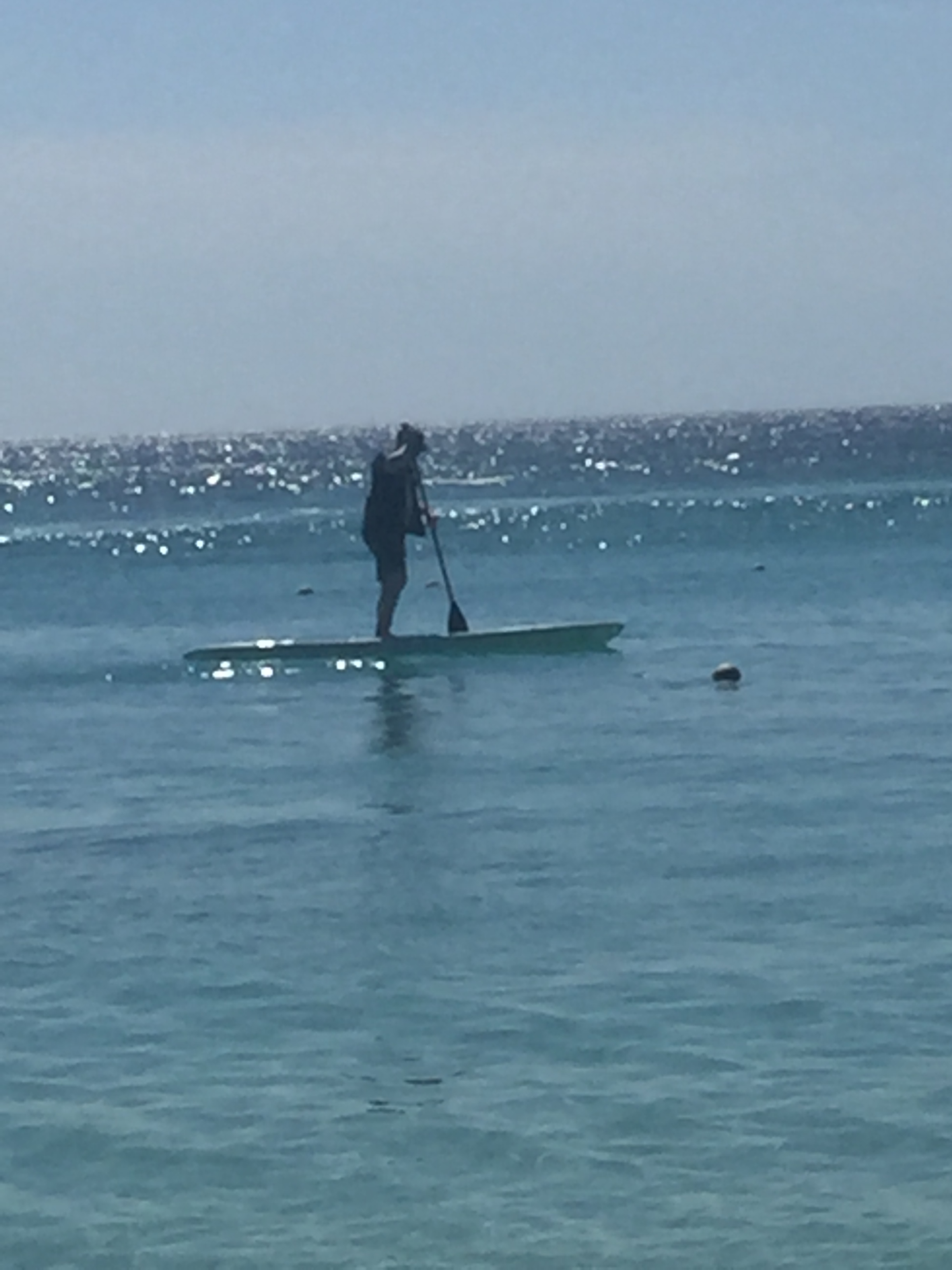 Roger trying out a Standup Paddle Board

Roger even got a little daring and rented a stand up paddle board for and hour. It obviously was not as easy as they make it look. After several falls and a bruised ego, one of the owners came out on a paddle board and gave him some tips.

At the end of our time here at this oasis it came time to settle up and pay our tab. I braced myself as I slowly turned over the bill remembering our $20 drinks in Grand Cayman. I was delighted and frankly surprised at the total. I had to double check it to make sure they actually charged us for everything. Foods and drinks for 4 adults over the course of 4 hours with tip was just over $60 US! Now we are taking! Our driver collected us and took us back to his car. Unfortunately he had not had it running so it took a while to cool down enough for us to get in and ride back to the ship.

After about 20 minutes of negotiating across the island we were back to the ship. We paid the driver for the day and re-entered the circus. We made our way to a shop to get our obligatory shot glass and peruse the colorful crafts and wares of the locals before getting back on the ship. 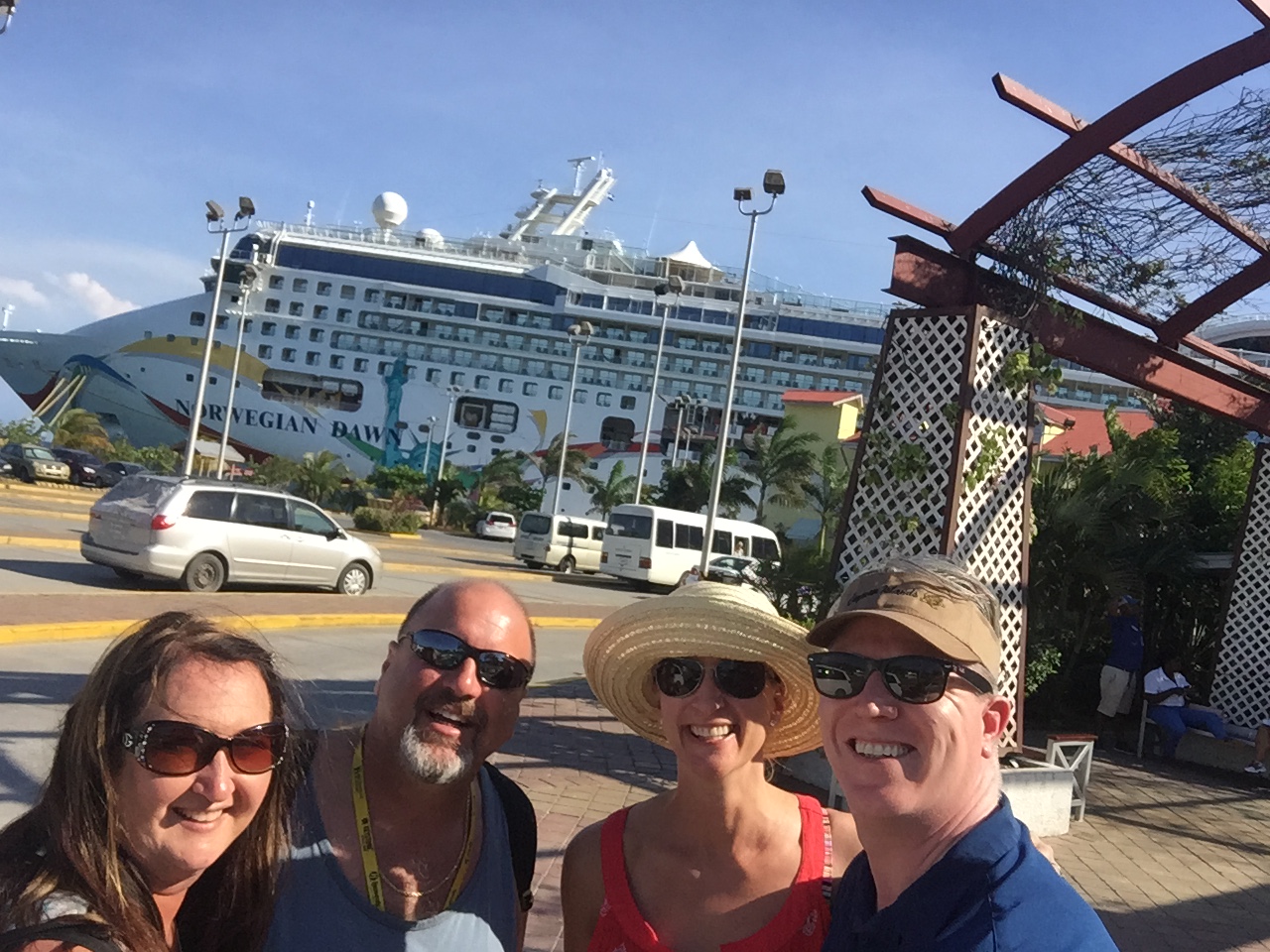 Debbie & Mike Mertz with Amy & Roger back at the Ship

Roatan was a beautiful island. It is definitely a great spot to visit and we would suggest you put it on your list. We had a great time and it was relatively inexpensive. Private driver for the day, zipline canopy tour with pictures, 4 hours at the beach with food drinks and paddle board rental and souvenirs. Total spent: $165US